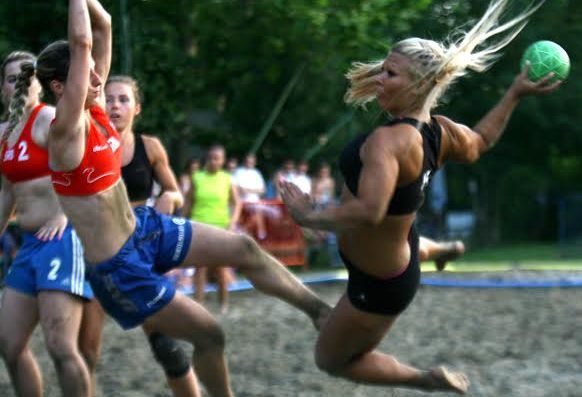 This year&#39;s event started on Thursday and 12 teams in each gender play their preliminary group matches (2 groups of six teams) till Saturday noon to win best „starting positions“ for last three „steps“ in competition, from quarterfinals up to the gold medal match! In male competition in Group A, defending champions from Russia, team Ekaterinodar“ from Krasnodar lost against Spanish side „Ciudad de Malaga“ and after winning Danish „HEI Skaering“ won second place. Teams that qualify for quarterfinals in „Group A“ are: Ciudad de Malaga (ESP), Ekaterinodar (RUS), Oroshazi (HUN) and HEI Skaering (DEN).

In Group B, which is even more equalised then group A, best ever European club „Detono“ lost 2 matches in group stage and at the end get third position behind Plock (POL) and „V Gaw“ from Portugal and ahead of Torslada HK (SWE). Minden (GER) and Grosseto (ITA) will play phase for places from 9th to 12th.

Female competition brought a lot of interesting matches too, and at the end of preliminary phase first four qualified teams are: Szentendrei (HUN), „Deporte y empresa“ (ESP), THSV Camelot HS1 (NED) and Beachqueens (SUI) in Group A and Dubrava (CRO), „Lady bugs“ (HUN), Getasur (ESP) &amp; „2Much 4You“ (POR). After first two quarterfinals „Szentandrei“ and „Dubrava“ quaalified for semifinals that will be played tomorrow.

In quarterfinal matches that will be held this afternoon, pairs will be 1A – 4B, 2A – 3B and so on.

If you are interesteed to follow live those matches, you can do it on EHF Champions cup Youtube channel on https://www.youtube.com/playlist?list=PL6FkWVdzEY0XM8QTmyaiZIDCPdQT3VlqN