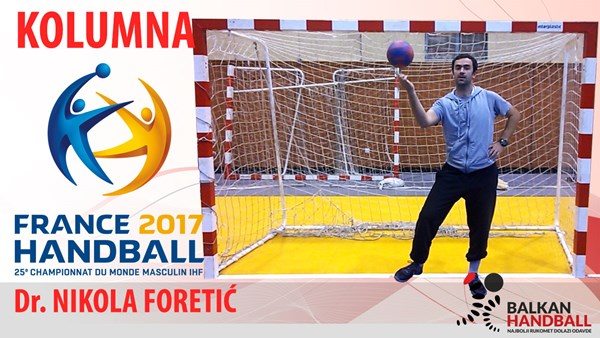 All 4 games in medal fight had some tension and excitement. Some had result, some regional and some had uncertainty tension and excitement. Players gave their best and there were no objections in this matter. At the end of WC total impression is very good. France is a champion (again), Norway confirmed its quality, talent and solid character; virtue mix that is rarely seen in Scandinavian team. Slovenia achieved historical success winning bronze medal. Croatia again fought for medal and has been close to victory in every match. At the end of this handball festival some questions had to be asked: in which direction game goes & what is its future?

This WC presented teams that played “handball” & “antihandball“. “Handball teams” create more fast breaks, defend with contact & attack with lot of movement and tendency of including as much as possible players in attacking action. Hence players of these teams rather focus on shooting than on outsmarting opponent, game is very fast and exciting to watch. On the other side “antihandball teams” have strong desire do dismantle opponents play. They are focused on defense with lot of defense-attack rotations & rarely running fast breaks. In attack players are more concerned of keeping ball possession than shooting on goal. To conclude these teams play so slow that man have impression of broken TV. „De gustibus non disputandum est!“. In matters of handball taste, there can be no disputes either.

Although “attack is the best defence” majority of teams built their game primarily on defense. Why? Because positional attack is a game segment that needs most time for training so the gains are often very slow and hard to see. Consequently, instead of new tactics coaches used well known tactical models that players play on clubs level. These are “main stream” of current handball: “dragging”, pivot around defense, wing around defense, wing on second pivot, crossing & combinations of mentioned actions. Large number of attacking actions for many teams was based on individual quality and 1 against 1 play. Because of that a lot of attacks were dull and without creativity. Although some selections based significant part of attack tactic on 7 vs. 6 this WC confirmed its sluggishness compared to 6 vs. 6 attacking. In 7 vs. 6 situation majority of playing positions were passive without intention of attacking. Outfield players were more orientated on passing rather than shooting and “seventh” player was just focusing on running to bench and substitution. Attack transition is part of game philosophy so some teams are playing it and some don’t. However, dissection this game phase on smaller segments gives coaches possibility for using it all the time in some shape; transition without interference (1 vs. 0), attack on unlined defense with more attackers (3:2, 5:4, etc.), attack on unlined defense with less attackers (2:3, 4:6, etc.), attack on unorganised defense or fast centre. All teams that participated in medal fight used some of above mentioned segments of attack transition. The best without question were Norwegians.

Basic defense for almost every team was some variation of 6:0. Incomprehensibly even African and Asian teams without sufficient morphological characteristics dominantly played this defense. 5:1 was used only by 8 teams. Only defensive novelty was 6:0 to 5:1 transformation within the same defense played by Croatia. Other defense systems were not able to see. 3:3 defense played by South Korea that was exotic but very efficient causing a lot of problems to many European teams must be remembered with melancholy. 3:2:1 defense that was demonstrated “for books” many times by Croatia national team seems to be forgotten. Proactive systematic defense transition is still preparation taboo for tournament competitions.

This WC showed that in the future will be harder and harder to separate players on “defensive specialists” and “attacking specialists”. More game is played in space and time between these 2 positional parts. Future handball player should be “specialist for handball”. Confirmation of this thesis was final match in which French and Norway players equally participated in attack as in defense. Consequently, instead of “game phase rotations” (attack-defense) we witnessed “time rotations” (accordingly to playing time). This significantly contributed to game dynamics. Playing position profiles haven’t changed remarkably since there were no changes in playing position roles. There is certain regression in middle back player selection. Different types of players appear on this important position although they are not able to shift attacking tempo, reactive move players and coherently organize game dependably of opponent’s defense. Teams without “true” middle back play relatively predictable and simple attacks that are rarely surprising, fluid or creative. Considering players, biggest breakthrough of this WC was affirmation of huge number of young players. Best 7 are showed in table.

“Coaches geography” shows that Spanish handball school is still in fashion although none from Spanish coaches brought his team to ½ final and fight for medal. 5 Spanish, 3 Croats and 3 Icelanders led totally 11 teams at this WC. 2 major coaching profiles were present; former players (even 14 coaches had national team career) and experienced coaches like Lino Červar, Gudmundur Gudmundsson, Jordi Ribera or Valero Rivera.

As it was written in introduction article rules didn’t significantly contributed game development. Let’s look at the most controversial. “Seventh player” additionally slowed down positional attack. Faster teams don’t use this tactical option so the existence of this rule is questionable in the future. Passive play is still most objected rule for most coaches. Some of them, when in defense, spend more time calling passive play and pressing referees than leading their own team. As soon as possible technical solutions must be found for shoot clock in handball!! Throw-off from position where player come into ball possession is not so bad idea considering how many fast breaks were “killed” because of turning the ball back few meters. Capitan’s band on this WC wore Valur Sigurdsson, Raul Entrerios & Thierry Omeyer highlighting importance of team captain role in social dynamic of handball team and sending clear message to IHF officials and administrators.

Figure below shows number of goals scored per match at WC 2017. Increase could be seen when comparing to competition before (Qatar 2015.). Let’s hope that this is a sign of new positive trend of handball game development in which technical and tactical demands will become more important than physical. Let’s hope for a game in which runners run, kicker kick but players play and win in it… 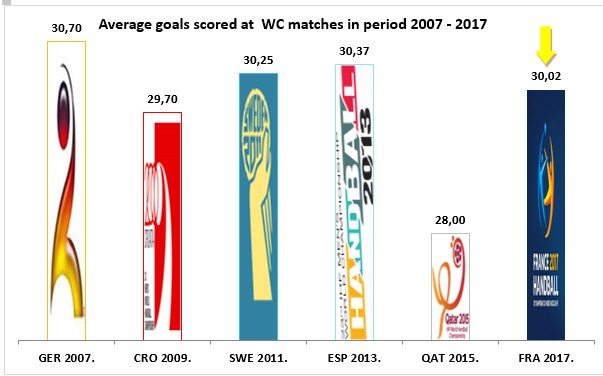