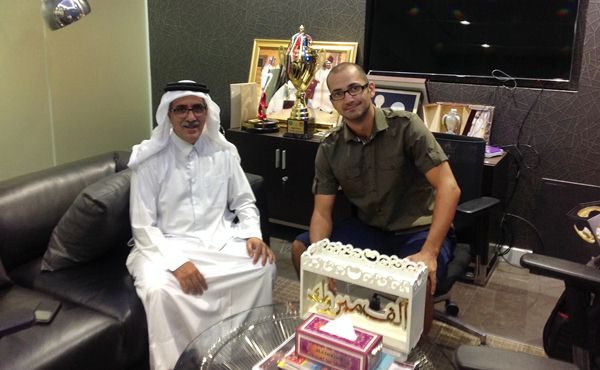 Duhail Sports complex is the home of Qatar handball. The President of Qatari Handball Association Ahmed al-Shabi opened the door of great sports complex with Arena of 5.000 seats + VIP sectors, four traning halls, hotel with 16 rooms, kitchen to serve it, swimming poll, 23 people who are working here, to editor of Handball-Planet.com. Here is what we can heard…

There were a lot of rumours that handball in Qatar will rapidly go down after Qatar 2015, but you kept some level of results…

– We can’t put our team on the level of big teams like Germany and some others. We are working hard with full support of our Goverment and authorities who love handball. We have courage to continue to strength our position in the future, despite we can’t cope with the nations like Germany, with 1.000.000 handball players. You know that Qatar has only 2.5 million inhabitants.

Did you keep your positions in Qatari society after great success in January 2015, but also Olympic VISA as the first team’s sport from Qatar ever…

– Footbal is, of course, number 1, but handball is the best team’s sport if you look only result. No other sport can compete with us in terms of success.

– Qatari team was a huge surprise for the whole handball community. After Doha 2015 all the TOP teams wanted to beat us. That will continue in the near future as we are still silver medal winners. France 2017 will be a real challenge for us.

How do you see eighth place in Rio? You wanted a medal…

– First of all, we apologise to Qatari people that we didn’t won medal, but this is the first time for some Qatari team at Olympic Games. We beat Croatia, played good half against France, lose against Denmark because of referes’ mistake. That mistake put us on Germany in quarter-final, and it could be much easier if we played against Slovenia. At the end, we lost only against Olympic medal’s winners – Denmark, France and Germany.

Would this result affect your partnership with Valero Rivera, who has valid contract until Tokyo 2020?

– Medal was our goal, but we knew that won’t be easy. He is one of the world’s best and famous coaches. We won two medals with him, at Asian Championship and qualify for Rio. We trust him, there were maybe mistakes from some others, players for example. We will continue with Rivera to make even better team and results in the future.

The biggest critics were that NT players didn’t play enough matches during the season, as they weren’t able to play for their teams because of work only with NT in training camps?

– You are right, but that was our agreement with the teams for just one season. Without their permission we could’t do that. We affraid of injuries, and players have good and strong matches with NT.

What will be your goal at World Championship 2017 in France?

– There are eight teams who can win the Championship. We don’t have enough players on necessary level, we can’t promise a medal. Our first goal is to qualify for the knock-out stage.

What is the future of Qatari handball?

– We support team to work with the youngstars, and some of them like El Jaish and Lekhwya doing well. We working step by step. We can qualify for Tokyo, that is our goal. Only one team will go there from Asia, but we are working on it – concluded chairman of Qatari handball Ahmed Al-Shabi.