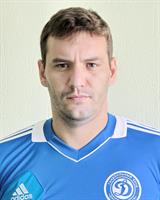 In Macedonian handball with two ambitious team – EHF CL competitor, RK Vardar and RK Metalurg can’t be boring. Experienced goalkeeper Petar Angelov has signed contract with RK Vardar just a few hours after the biggest rival RK Metalurg announced end of contract with him by mutual agreement! Despite some rumours that Angelov will sign for ambitious RK Pelister Bitola, team with the biggest tradition in Macedonian handball, but far away from the current level of two teams from Skopje, replacement for Darko Stanic in Metalurg decided to sign for the biggest rival.

RK Vardar have now four goalkeepers – Malumbres, Milic and Daskaloski, so one of them will probably leave the team in near future.

On the other side of the Skopje, Darko Stanic got a new partner in Montenegrian No.1 Rade Mijatovic (32). Mijatovic has played for Belarus champion HC Dinamo Minsk in the last season. He has experience of playing in ASOBAL, where he has been in Toledo, Antequera and Alcobendas. Mijatovic also played in Serbia for all major teams – Vojvodina, Partizan and Crvena zvezda.