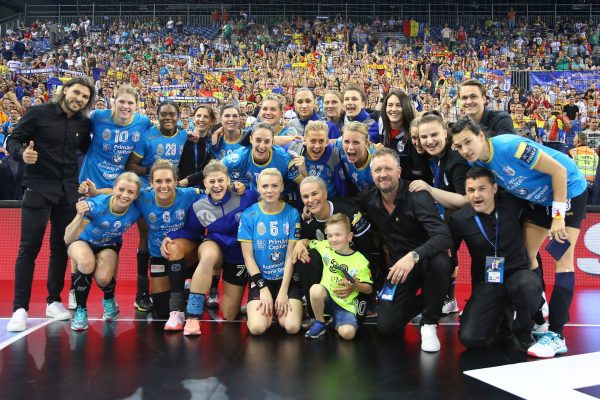 In the bronze medal match of the EHF Final 4, CSM Bucuresti defeated Rostov Don by 31-30. Both teams certainly redeemed themselves from Satuday’s low performance and proved why they reached this stage of the tournament.

The team from the Romanian capital showed a much better start and they quickly took control of the match, leading 8-3 after the first 8 minutes of the game. The entire first period belonged to CSM, who took the partial victory for 19-14 and run much more than on the semifinal, something that both the coach and players acknowledged as a failure against Győr. The Russian squad did not count with Ana Paula Rodrigues, who torn her Achilles tendon on Saturday’s match and will undergo surgery on Tuesday.

Rostov Don reacted on the second half and brought the match to a draw after 18’ (26-26). And the tension grew. But with 6’ left, Amanda Kurtovic set a three-goal difference that made it difficult for Rostov to catch up, though the difference ended up being of one at the final whistle.

The Danish right back Line Jørgensen, who was top scorer of the match with 7 goals, said after the match: “We thought about running a lot, and we started the game like this, we had a good advantage with 5 goals; then we let Rostov in the game again and they are a very good team, but we ended up with a one goal victory and a victory is always nice. I think yesterday we didn’t play good enough to beat Győr, and if we would’ve started the game like to day, with a lot more running maybe we would’ve have a better chance. Yesterday was not good enough, but I’m happy that we ended up with a victory”.

While CSM ended up with a triumph, and she finished as top scorer of the season (109 goals), Cristina Neagu could not hide her frustration after the match: “Of course this bronze medal is a little bit of a relief, it is good for a better harmony in the team, for the energy of the team, and I’m glad because of the players that are leaving the team at the end of the season, but mostly because of these wonderful fans that joined us this weekend in Budapest and they supported us yesterday and also today after the disappointment from yesterday, so let’s that it’s for that and I’m glad because we could offer them something to be happy of. But personally, I’m really frustrated and disappointed and I have some question marks, also about my performance, but also about our performance as a team, and for sure I have even a bigger challenge for the next season”.

CSM Bucuresti obtained their second consecutive bronze medal in Final 4 after the club’s biggest success in 2016, when they lifted the trophy coming to Budapest as debutants.