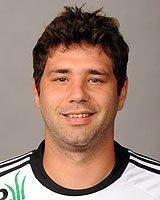 After young left wing Dejan Manaskov (20) is lost for the rest of the season due knee injury at the match against BSV Silkeborg, Macedonian champion RK Metalurg Skopje reacted quickly and found his substitution – David Korazija (30). Slovenian left wing is ex-player of MKB Veszprem, where he spent a few seasons, before his comeback to Slovenia, where Korazija currently playing for RK Ribnica Hiko Hise.

Contract isn’t signed yet, while Korazija is on some kind of a trial.