Déjà vu: Norway are in the final! | Handball Planet 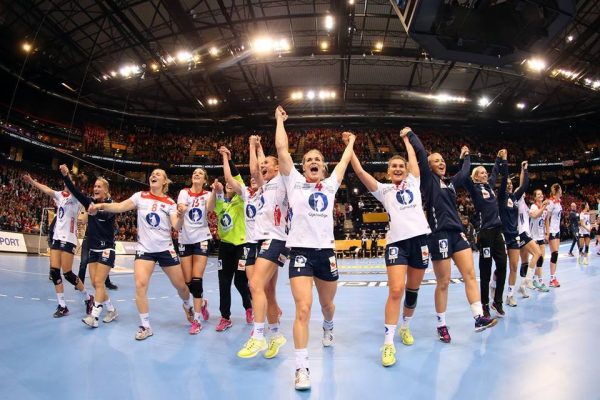 Once again, the Norwegian strenght proved to be too much for their rival. This time, the victims were the Netherlands. The first semifinal at the Barclaycard Arena in Hamburg, in front of 11.261 spectators, was another display of handball from the Scandinavians who won 23-32 and will defend the title obtained in 2015. They will face the winner of the second semifinal between France and Sweden and try to add their fourth World Championship gold.

With an absolutely ourstanding Katrine Lunde on the first period of the match, the Norwegians paved their way to the final. The goalkeeper shut down the goal to help her team lead 1-8 after 12 minutes. In fact, it was so hard for the Dutch to score that after 11 minutes, Helle Thomsen had already requested the second timeout to try to sort things out.

It took Netherlands 9 minutes to score for the second time (2-8) on a match that was uphill for them the entire time. The team orchested by Stine Oftedal from the centre back and Thorir Hergeirsson on the bench displayed a handball reportoire that delighted everyone, maybe also the Dutch fans. While we all expected a match like that of the EHF Euro final last December, we witnessed a sort of replay of the final at the Jyske Bank Boxen in Herning two years ago.

The second half was more even, but it was already too late for an epic comeback. Thomsen tried with different players, but the changes were not working either. After 20 minutes, Norway had reached the 10 goal gap (20-30) and only moments later, when there were 4 minutes left to be played, the Scandinavian fans stood up to cheer for their players, who had pulled off a fantastic match. The final score was 23-32 for the Norwegians, who will try to collect their fourth World Championship on Sunday afternoon. The MVP of the match was no other than Nora Mørk, who scored 8 goals.

“We started well in our defense and that made our game, the defense, the goalkeeper and our fastbreaks. On the second half it was a closer game, more even, but I think we controlled it OK. We’re looking forward to the final on Sunday”, stated Hergerisson.

“It was a really difficult match for us. From the beginning they had a high speed and all the things we talked about before the game, we couldn’t handle them, so they were much better than us and I think everybody could see that. When they play like that, we are far way from Norway”, confesed Thomsen.

When asked about what she had told her players on the second timeout, requested after only 11 minutes of the match, she explained: “First I called the first timeout because I think they started really good and it was really difficult for us. Then I think we were down 1-8, and of course I took a timeout again and we talked about what we could do in the attack and run home, but I don’t think that went so good so it was difficult to come back in this game”.

Handball-Planet caught up with Camilla Herrem after the match and tried to solve some unanswered questions about this outstanding Norwegian triumph:

-How did you do this?

-I’m not even sure (laughs), because this was an amazing game again. I think it’s just our defense that was again almost perfect.

-Were you expecting a tougher final?

-Well, we prepared this game as any other game. We prepare a lot against all the players and we watched a lot of videos. But the most important thing is our defense and that’s the key for us now; but we prepared this match as well as every other match.

-And an outstanding Katrine Lunde, right?

-Oh yeah, she’s so good, she’s the best goalkeeper in this world and in this World Championship this year, I’m so glad she’s Norwegian (laughs).

-You mentioned in other matches that you still had butterflies in your stomach for these matches, when do leave behind those nerves?

-The butterflies continue to be there until you can look up and say, “ok, now we can breathe a little bit”. But today it was just a perfect day and I’m happy that it went like this.

-Thorir Hergeirsson said that this is the best Norwegian team he has coached since he’s in charge, you’be been here for quite a while as well, do you feel this team has something special?

-It’s hard to tell. I think that the players are different, because when I first started in the national team the players were much higher, and now we’re a much smaller team, but we also have more speed. And I like speed of course!

Norway will face the winner of the match between Sweden and France.