DENMARK 2015: Brazil wins with half court goal at the buzzer!! | Handball Planet 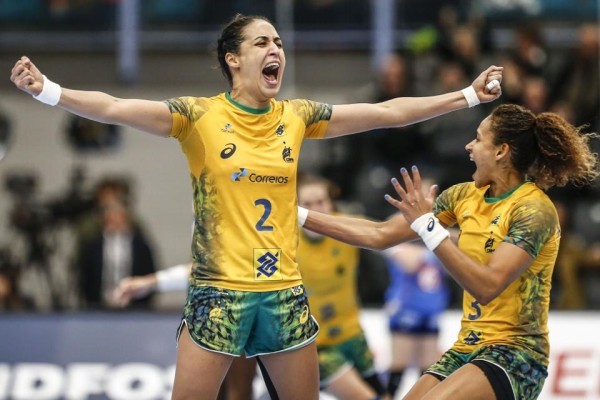 28 seconds left on the clock and a penalty for Brazil. Celia Coppi scores. It’s 20-19 for the defending champions and Alain Portes calls a TO and substitutes goalkeeper Amandine Leynaud for Estelle Nze Minko, France will play the last seconds with one player more. With four seconds left on the clock Nze Minko scores for France and ties the match. It’s about to be a draw, but Barbara Arenhart throws a quick pass to captain Fabiana Diniz who’s ready on the half court line, she throws the ball at the empty goal and scores right before the final whistle. Brazil wins 21-20 and guarantees the first spot on the group.

A very tough game was disputed in Sydbank Arena this afternoon, when Brazil encountered France. Both teams are known for their tough defences and today they were at their finest, it was everything you could expect from two world class teams. Tight from beginning to end, the first half finished with an advantage for Brazil by 11-9. With an outstanding performance by Ana Paula Rodriguez (MVP of the match, 5 goals) and the help from Arenhart under the posts, the South Americans managed the attacks and found their way to break France’s goal.

On the second half it was it was Allison Pineau and Estelle Nze Minko who led France to a reaction. The Baia Mare CB was top scorer for her team with 6 goals, but they were not enough to beat the World Champions. France took the lead twice in four minutes on the first 17 minutes through Marie Prouvensier and Pineau, but it didn’t last long as Deonise Fachinello and Ana Paula quickly tied. In thrilling final minutes, the match came to a tie at 55:36 once again through Prouvensier (19-19) and a goalless gap extended until the last 28 seconds, when Fachinello received a foul that lead to a 7 meter throw. The rest is history.

Quotes after the match:

“I never lived anything like this. As a player you hope to have at least one second of glory. I’m a specialist in defence, so I’m not used to making lots of goals, I don’t have that much presence in attack. Handball is a sport of goals, and the idols in this sport are the ones who make most goals. But my task is a different one and I’m conscious about it, I’m happy to have that role in the team, I defend my country, our colours. I was very happy with the goal, but it was a team’s goal, whoever shot that last ball, it would have converted because everyone believed that the victory was possible”, confessed Diniz after the match.

Morten Soubak, who is in home soil, expressed with relief: “Of course we’re very, very happy with the result. I have to say that today we’re been very, very, very lucky to end up winning the game by one goal. We knew had to win the game to be first of the group, a draw would send France to the first position so we had to win to win our group.”

On the other side, Alain Portes lamented: “I think we were unlucky today, but now I don’t want to talk about today’s, I just want to focus on the next game, whether it’s Norway or Spain. This game is now finished. This is, of course, very difficult for us, but it is now finished”.

2012’s IHF Player of the Year, Alexandra Nascimento stated: “Yesterday we didn’t play so well against Argentina, but what happened today was unbelievable, I think we played very good in defence, in attack we made some mistakes, but we had the power to win. We’re very happy with the result. Today Brazil played with the heart.”

France’s right back Camille Ayglon was short of words: “I think it was a very good match in defence and it’s a very good preparation for the eight finals”.

Brazil will play the eight-finals against Romania on Monday at 20:30hs, in Kolding.