DENMARK 2015: Korea qualified after a thriller against Argentina | Handball Planet 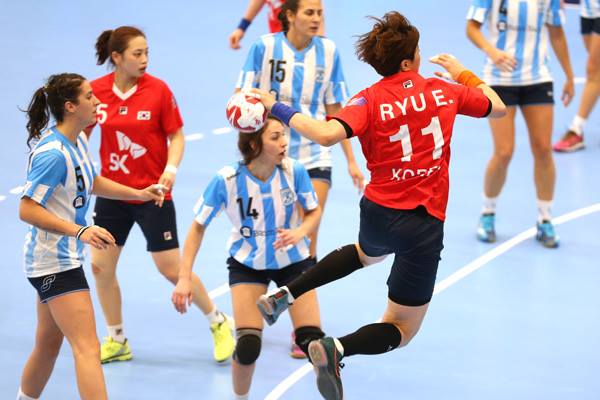 The Asians conquered their second victory on the group against Argentina and booked a spot among the top 16 teams on this World Championship in Denmark. It was 22-29 for the Koreans, despite a very disputed match throughout the 60 minutes.

The first half was very equalized. The Koreans were able to establish a three goal difference through the fast break after 11 minutes (4-7), but Argentina reduced the errors in the ball management and quickly shortened the gap. After the first fifteen minutes Luciana Salvadó scored for the 7-8. Argentina had the last ball to tie the match in the dying seconds of the first half but a turnover resulted in the Asians going to the 15’ break with a two goal difference: 12-14.

On the last period Korea quickly established a 5 goal difference and Argentina trailed, reducing the gap to two or three goals at times. The final break came after the first 15 minutes when the South Americans had problems to attack the deep Korean defence and suffered some fast breaks that established the final difference. Despite a late reaction from the conducted by Eduardo Peruchena, Korea took a 22-29 victory and booked a spot in the eight-finals. Manuela Pizzo from Argentina (5 goals) was awarded the player of the match.

Korean coach Chul Young Lim expressed after the match: “We had some difficulties in the first half with the defence, but on the second half we changed that and we found a solution against Argentina that helped us win the match.”

Peruchena stressed his happiness despite not qualifying for the next round: “Even in the defeat, we’re happy and thrilled because we improve game by game and we’re showing an evolution in our performances. Despite being out of the knockout stage, we think we’re doing it very good in this World Championship.”

Jihae Jung: “We had a difficult match on the first half, but on the second we improved our defence and that made Argentina make some mistakes so we were able to go on fast breaks and that is one of the reasons why we won the match. Hopefully we’ll do better on the next game where we’ll have a tougher opponent”.

Korea will play against Russia on the eight-finals in Kolding on Monday at 20:20hs.

Also, Germany beat Congo for 19-37 and will travel to Frederikshavn to face Norway in the eight-finals.