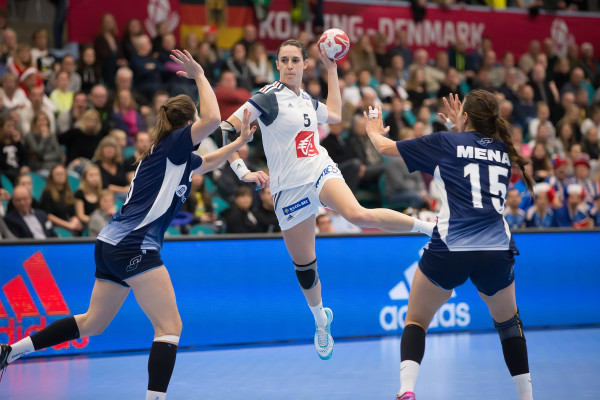 The French team dominated Argentina on yesterday’s duel for the third match of group C in Kolding’s Sydbank Arena when they obtained their second victory for 20-19 and secured a spot in the eight finals. The Europeans were just too much for the South Americans who showed a better image than on Monday against Germany.

The conducted by Alain Portes were fluent in the attack and encountered a firm Argentinian defence, however the quality of players of the likes of Camille Ayglon-Saurina, Grace Zaadi and Allison Pineau were the key to unlock the persistent 6-0 proposed by Eduardo Peruchena’s girls.

At only two minutes, Argentinian fans back home (and the two or three present in the Arena) worried with Luciana Mendoza’s apparent knee injury; however, she was back on court shortly after. France established the first difference through the fast breaks and reached a seven goal gap in 13 minutes (8-1). The first half finished 13-6 in favour of the French, who found their way to the goal.

The second half was much more even and Argentina continued to display a fierce defence that complicated the French attack. But on the other side of the court, they couldn’t trade those good defences for goals because Laura Glauser simply had a great night (was awarded player of the match) and shut the goal with an astonishing 65% of saves. The last 30 minutes finished with a 7-6 score for France and a final result of 20-12.

Alain Portes expressed his view on the game: “We are very happy because we won, but it was a game in which we played a lot of time in defence because the referees wouldn’t call the passive play signal. But Argentina made a good game; they have a very tough defence. Maybe in a few years’ time they can be as good as the men’s team”.

For coach Peruchena, “France is a team we look up to and I’m happy that we were able to keep a good level during almost all 60 minutes, particularly in the defence. We certainly improved our image compared to yesterday’s match against Germany”.

Tomorrow will be rest day for group C, but on Thursday there will be a South American clash between Brazil and Argentina while France will meet Congo.