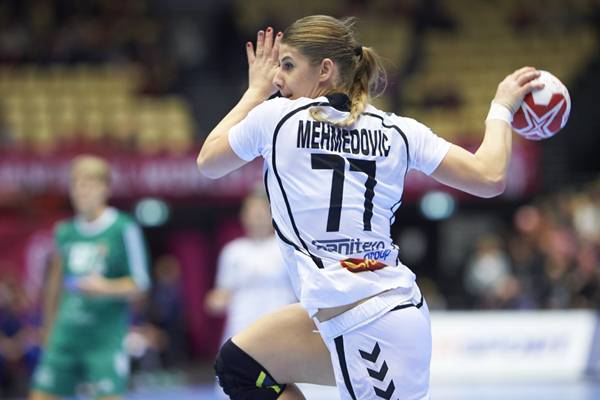 Denmark and Motenegro are qualified for the eight-finals from Preliminary Group A in Herning at Women’s World Championship 2015. Danish team outplayed Serbia in the second-half on the wings of home fans in sold-out „JUSK BANK“ arena, which witnessed superb defense by Danish girls in the last 20 minutes of the match – 29:20 (13:12).

The Serbian girls showed nice performance in the first half with Kristina Liščević (five goals) in the main role, but that was stopped by Danes after half-time break. Poulsen between the posts led the home team who received only four goals in the last 22 minutes to secure spot at knock-out stage.

At the end, Line Jorgensen netted seven for the winning squad as the top scorer at the match.

Most impressive performance of the day going to Montenegro. Classy style which reminds of the best matches of ŽRK Budućnost in EHF Champions League, played Katarina Bulatović and her team-mates. Montenegro trashed Hungary 32:15 (17:9). Defensive line of Dragan Adzić team was just perfect. Hungarians were in the match until 4:4, but that was the end of hopes of Nemeth girls tonight.

Strong defense, easy goals, a lot of ideas in attack, all were on the highest level. Bulatović, Raičević (ex Knežević) and Radičević  (scored 6 goals each)made 12:4 series to bring their team to 19:9 (from 7:5), but that was just a beginning. Hungary netted only six goals for the whole second half (two from 7-meter shots by Anita Gorbicz). It was a great happiness for Balkan fans to see the team like Hungary on -17. The man of the match was goalie Sonja Barjaktarović with 14 saves.

Japan easily past Tunisia 31:21 in the opener of the Day 4 in Herning. That means Japanese girls will fight for the eight-final spot against Serbia on Wednesday, 18.30 hrs.