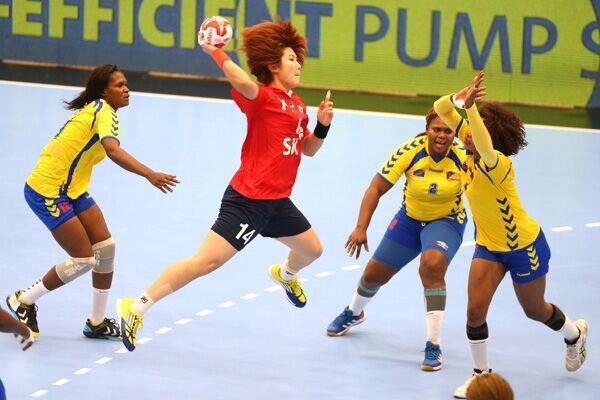 Korea finally got the first victory in the tournament after defeating Congo for 35-17.

The Asians began with a 3-2-1 system that proved to be effective against an African team that didn’t know how reach the goal, due to the high intensity and speed from the Koreans. The frustrated attacks from Congo, mostly rushed by the passive play signal were quickly exchanged for goals through fast breaks from the Koreans.

Celestin Mpoua Nkua called a TO after only 10’ of the game, when the score was 5-1 in favour for the Asians. In the following attack, Jumelle Okoko tried to penetrate the Korean defence with a feint against Eun Hee Ryu, who had a late reaction and ended up hanging from the attacker’s arm. Okoko converted the goal while Ryu laid on the floor in pain and had to abandon the court with 6’28” on the clock. Only three minutes later, Clemance Matutu Luwemba saw a red card after a tackle against Yura Jung, who was running alone towards the goal.

On the second half, the Congolese were able to score more fluently, but the Koreans didn’t lift their feet from the accelerator and punished with the fastbreaks. After 20’, the scoreboard showed a 27-15 advantage for the Asian champions that would only increase within the last minutes for the final 35-17.

Christianne Mwasesa, named player of the match and top scorer with seven goals, expressed: “We came here to face a big team who had good results against Brazil and France. We were quiet because didn’t want to look ridiculous, we just wanted to show our best face and I hope that we succeeded in showing the best image we can”.

South Korea’s coach Chul Young Lim stated: “We’re happy that we won. It was not good that we had an injured player, but it’s not as bad and she will get better. This is not the first time that she has this injury, but I don’t think she will miss the rest of the tournament”.

Korea’s next match will be against Germany on Thursday and Congo, already out of the eight-finals, will face France.