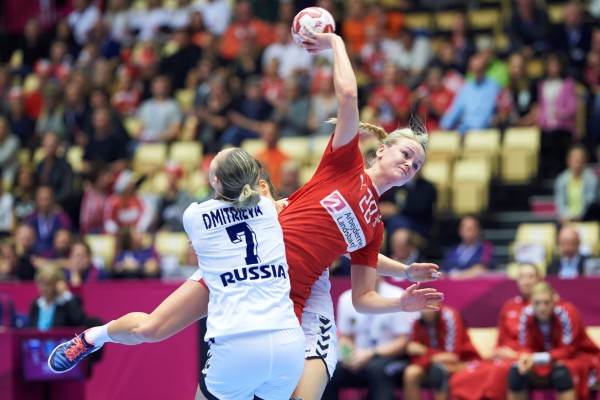 Denmark had a tough afternoon in the Jyske Bank Boxen as they lost to Russia for 25-21 in a match that they had dominated on the first half, but slipped from their hands on the second period.

It took Denmark 13 minutes to turn the tables and lead on the scoreboard (5-6) at the beginning of the match. With another amazing performance by Rikke Poulsen (45% after the 1st half) and an unstoppable Stine Jorgensen (6 goals), the home team was able to create a five goal gap against a Russian team that couldn’t find their way to Denmark’s goal. Once again, Anna Vyakhereva was one of the highest points for the conducted by Evgeniy Trefilov with four goals. The first half finished 12-16 for the Danes.

On the second half the Russians stepped on the gas and in four minutes they tied the match but the team conducted by Klaavs Bruun Jorgensen was patient to turn it around again. After the first 15’, it was 18-18. However the Russian girls improved their game and Denmark’s defence had some problems to control their opponents.  Only five goals were scored by the local team on the second half, and that might have been one of the reasons why the Trefilov’s girls took the victory and the 5th place in this championship.

Stine Jorgensen and Vyakhereva finished as top scorers of the match with 7 goals each and the Russian was also chosen as MVP of the match. Louise Burgaard, who finished with 3 goals in 7 attempts, did not hide her frustration for losing the match after having had a very good first part: “The disappointment of this second half is big, it really was bad, and it’s hard to talk because that’s what’s in my head right now. I think we lost our tempo and the speed in both the attack and the defence. But overall (in the tournament) we’ve had some very good periods when we were unstoppable, but we also had too many bad periods in the games; we have to have more of the good periods if we want to be at the top”.

Regarding the 6th place and the possibility to qualify for Rio 2016, the FCM Handbold right back reflected: “It was very important for us to have the Olympic qualification and it is some sort for comfort, but the disappointment of not getting into the semi-finals or further is still inside of us. We have to work very, very hard (to qualify for Rio) and we will meet again in March. We have to do a very good job with our clubs, train very hard, both physically and handball wise”.