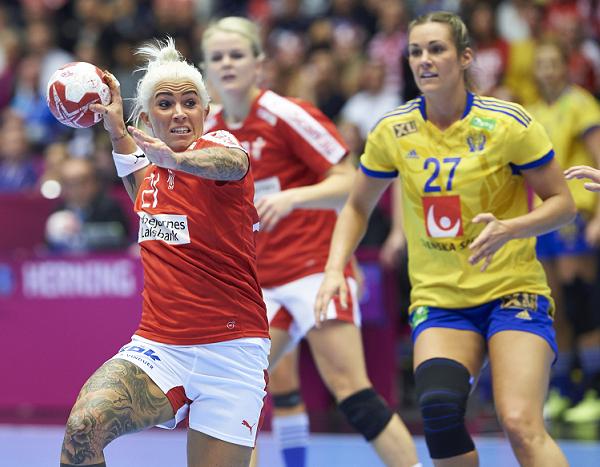 Destiny wanted two Scandinavian teams to face each other in eight finals, and finally, it was host team the one that reached the victory. After a thrashing first half of Denmark, where a fantastic Kristina Kristiansen perfectly led the team and goalkeeper Rikke Poulsen made crucial saves, Sweden’s mission became almost impossible after the break. Although initial minutes were too equalized, Danish team just needed a quarter of an hour to start setting significant differences. They took advantage of Swedish team’s errors and set the biggest gap until then by becoming some fastbreaks into goals. After that, with 8:6 for Denmark in the 16th minute, Sweden’s most outrageous minutes started so they wouldn’t score more than one goal in the rest of the half. Too easy game for host team, they must have thought the attendants in Herning, so Sweden’s reaction started after the break. They found easier the way to score to their opponent and started getting closer in the scoreboard (just three goals difference ten minutes left for the final whistle). Espectacle and tension were increasing indeed. But that wasn’t Danish player’s idea. They wanted the ticket for the quarter finals, so they demonstrated they deserved it. They started defending in a stronger way, and again, made Sweden complicate their own attack. Besides, Danish six goals almost in a row in the last ten minutes definitely sentenced Swedish team, who said goodbye tonight to this World Championship. Meanwhile, host team will surprisingly face on Wednesday to Romania after they have beaten current world champion Brazil.