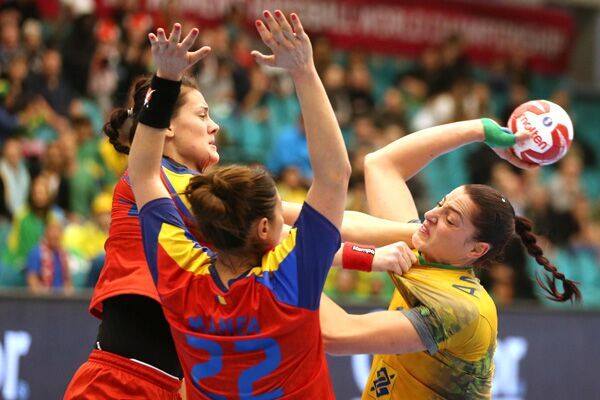 Romania have stunned the world champions Brazil and have advanced to the quarter-finals after a match where the they were better and the South Americans couldn’t find the answers on time to catch up. The defending champions just didn’t have their best performance and it was not enough to tame the hungry Europeans, who won 22-25.

The first half was all for the conducted by Tomas Ryde. Paula Ungureanu (MVP of the match, 29% saves) was determining in the first minutes of the game and on the other end of the court Cristina Neagu, Aurelia Bradeanu and Eliza Buceschi led the attack to take off on the scoreboard by 8-13 at half time. Brazil’s defence was not working fine and goals would come in all shapes.

On the first minutes of the last half, Brazil was able to shorten the gap to two, but every time that happened, a Brazilian player got excluded (Daniela Piedade, Deonise Fachinello and Eduarda Amorim respectively). Romania took advantage of that power play and extended the lead to five every time. Fierce as usual, the Brazilians did not give up and managed to get to the last two minutes only one goal behind (21-22), but Bradeanu, twice, and Nechita on the final minute, smashed the South American hearts and crowned a very good team performance.

Tomas Ryde stated after the match: “I’m happy with the victory. It was a high intensity game and, at the highest level we can play in the World. We had a very good first half, with a good structure. We knew that the Brazilian never give up so we prepared for a good start on the second half. A big difference for us was the defence, 6-0 more aggressive than before, and also the 5-1. And Paula (Ungureanu) did, so far in this tournament, the best game”.

Morten Soubak reflected on the reasons why Brazil lost: “It was an intense game. For sure our first half maybe ended up making the difference on the game, we tried to change some things in attack and defence for the second half, but although we came close, to one goal, but it was not enough. Ungureano had an outstanding performance and I might say that in such a game, in a World Championship, you’re going to pay for the missed balls”.

Ana Paula Rodrigues, one of the best players from Brazil on this tournament (top scorer for Brazil with 5 goals), expressed: “I’m very saddened right now. Romania was better than us today and we didn’t show our best, in attack nor in defence. We’ve grown in the competition, we’ve improved game after game because we didn’t start very well, but today it was not our best performance. We missed everything that we shouldn’t have missed, it just didn’t work today”.

On the other side, Cristina Neagu (6 goals) stressed the importance of the team work: “I think we had the key all along, but we just didn’t unlock the door. The key for us today was the team, the fact that we played like a real team, the fact that we left behind us all the bad things that people talked about us, unfortunately in Romania, saying that we wouldn’t be able to beat Brazil. We did it today and we’re very happy, but we’re thinking about Denmark now and the most important thing is to recover now because we played with 7 or 8 players and we’re tired.

About having Denmark on the next round, she expressed: “They will play with the support of 12,000 people in Herning, but we’re the ‘surprise’ team in the quarter-finals for the people and maybe the pressure will be on them because they’re playing home, they want to have a good result because their the organizers of the championship. We don’t have any kind of pressure; we’re just going Herning to give our best”.

Romania will go to Herning to meet the host team at Jyske Bank Boxen, on Wednesday at 20:45hs.