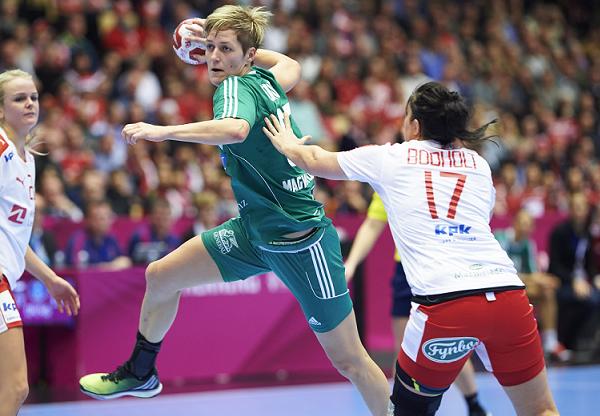 It was expected a tough and equalized game today in Herning, and also was expected host team winning over Hungarians, as they were tagged as favourites before the game started. But against all odds, Magyar team easily defeated Denmark (29:22), who never in the game had been next to the victory. An exceptional Zita Szucsánszki was at the head of her team’s attack, not just scoring but making her teammates score, while Danish attack wasn’t flowing as in other games. Hungary started the game really seriously and it was in a few minutes when they set a significant difference in the scoreboard, as they were winning by four goals (6:2) in 9 minutes. On the other side, Danish star Kristina Kristiansen was not shining as she usually does and so was the rest of the team. But goalkeeper Rikke Poulsen made some saves that kept her team in the game. Denmark seemed to start reacting after that four goals difference, as they scored 5 goals almost in a row and minimized the advantage of their opponent considerably (8:7). But again Zita Szucsánszki appeared accompanied by the unique Anita Görbicz to save their team and set another appreciable gap between them and their rival (13:8). Coach Klavs Bruun Jorgensen tried to change the ways, even he changed goalkeeper, but he couldn’t avoid ending the first half with his team going behind on the scoreboard. Second half was even more terrible for the host team, as they couldn’t manage how to defense Hungarian attacks. Magyar team continued as tough as they had been in the first half, and this made Denmark sink little by little. 20 minutes after the break, Danish attack only had been able to score 3 goals while they had received 10 thanks especially to the flow between Anita Görbicz, Zsuzsanna Tomori and Piroska Pappne Szamoransky. The host team seemed to need a miracle to turn down the situation, but finally there was none. They just could score three goals in the final minutes to hide the real superiority of Hungary in this game.

Teams Ranking of Group A: