DENMARK 2015: Russia will go for the 5th place | Handball Planet 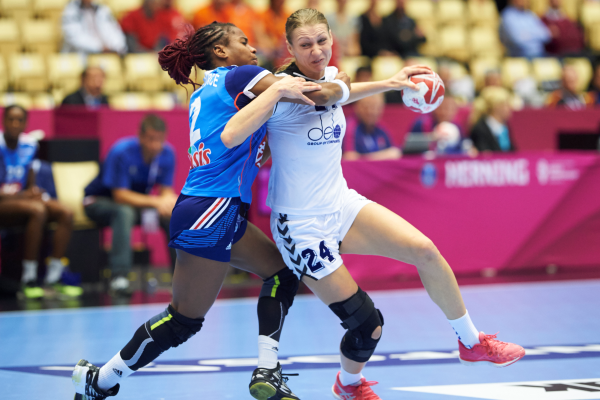 An unknown France stepped on the Jyske Bank Arena today as they faced Russia to book a spot for the 5th place placement match. With a very effective collective game, the conducted by Evegeniy Trefilov finished with a 25-31 victory against a team a French team that only appeared on the second half of the match, according with Alain Portes himself.

The first half showed a very dominant Russian team that obtained a three goal difference after seven minutes (1-4). The several exclusions in the first moments of the game did not help any of the teams, but despite having more than their opponent (2 for France, 5 for Russia) the conducted by Trefilov took better advantage of it and extended the lead to 3-11 after 23’minutes.

The French were goalless for 12 minutes until Coralie Lassource broke the spell. On the dying minutes of the first half, Portes’ players shortened the difference to go to the half time 8-15. Russia found in Olga Chernoivanenko their top scorer of the first half (3/3 in penalties, 5 goals in total).

On the second part of the match France improved their game, with a good performance by Metz’s center back Grace Zaadi (6 goals, top scorer for France), but the effort was not enough to come back in the scoreboard. The good interventions by Anna Sedoykina were one of the reasons why Russia was able to keep their cool and maintain a four or five goal difference throughout the second half; while Leynaud and Glauser on the other end of the court did not have their best performances. Gnonsiane Niombla received three two minute suspensions and saw a red card in a match that had 7 exclusions for the French and 9 for the Russians.

“In the first half we were very bad in defence and we just saw them play. In attack we missed too many shots. Then when we improved our defence and used the fast breaks we couldn’t convert those chances”, expressed Alexandra Lacrabere. Alain Portes also reflected on today’s loss: “The result is logic because the best team won today. I think we didn’t start the game very well, we slept a little bit. The team of France was not that of the first, but that of the final minutes of the game”.

On the other hand, Evgeniy Trefilov confessed: “I’m happy with the performance of the team today, but playing from below the third place is not good for us”. Anna Vyakhareva, who finished with 6 goals (top scorer for Russia) was awarded best player of the match.

Russia will play on Sunday for the fifth place against the winner between Montenegro and Denmark.