DENMARK 2015: 'The flying Dutch' are in the final! | Handball Planet 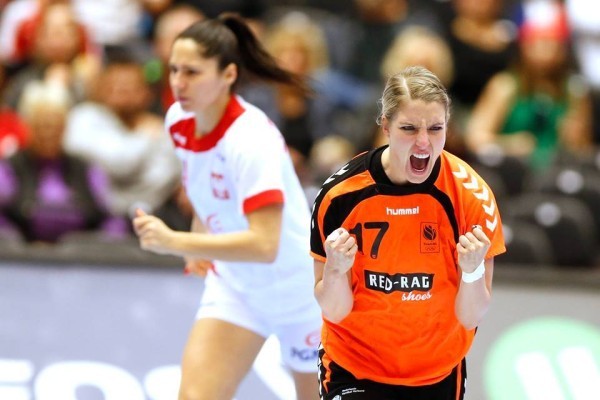 The team conducted by Henk Groener booked a place in the final of the 22nd Women’s World Championship. They have beaten Poland for the second time in the tournament, this time by 30-25, and have made it into the final of a World Championship for the first time in history. The girls were not expecting to reach this final stage in Denmark, but have grown from match to match to get to this final weekend with an intact dream and a way of playing that has truly conquered lots of handball fans.

The Oranje team dominated the match from beginning to end with a new amazing performance by Tess Wester on the first half, when she finished with 53% of saves. The dynamic attack that Groener’s players have shown throughout the championship was on court once again, with a speed that was just too much for Kim Rasmussen’s team. The first half finished 15-8 in favour of the Dutch team. Patrycja Kulwinska was one of the highest points for Poland on the first half, top scorer with 4 goals.

The second period saw Poland catching up and shortening the gap up to four goals, but by then there were only 10 minutes left on the clock (24-20) and it was just not enough time to turn the tables on their side as the Dutch team were not in the mood to suffer; they stepped on the gas solved the match, which ended with a five goal difference.

“I’m very happy right now, very proud of the team. We played a wonderful tournament so far and this match we had to beat Poland again, which is not easy; but I think we had a great start, our defence was strong, we could play the fast breaks and we were able to create the distance on the first half. But we knew that Poland is a team that never gives up and in the second half we were a little less concentrated or focused, their goalkeeper took some shots and they got closer but we stayed in control and kept a little distance and at the end we had a great win”, summarized Henk Groener after the match.

Kim Rasmussen, on the other hand, showed his disappointment with a loss that leaves them out of the race for the gold, like in 2013: “They were a little bit too good for us. I don’t know if during the first 35’ the girls had the first match (against Netherlands) in their heads, because it looked like we didn’t believe that we could score against Tess (Wester). But then when it looked completely impossible, they let go of the nerves and they showed great spirit to get back. However the Netherlands deserve the win, they played better than us today. We are very disappointed but I’m still proud of my players, because of how they fought back”.

Regarding the match for the bronze medal on Sunday, the Danish coach expressed: “I will be ready, I will do my best to get the girls together. We have to focus on what we can have around our necks, in the end if these teams really, really want something and can keep their heads in the locker room and just play handball with their hearts and their emotions, we have a chance to win. We have to understand that we are here again and that we have another shot. I will go in front, I will drive them to it if I have to, I will support them and really back the girls up because we’re here and we want to have a medal hanging from our necks”.

The MVP of the match, Cornelia Groot, reflected: “It feels so good to be in the final, we feel so proud. Of course when you start the WC you dream of this and you really want it, and you truly believe you can do it and we finally were able to prove it to ourselves. We’ve been building ourselves up, playing better and better, not so stable at some points; we beat very good teams but also lost some, and now can see that everyone is more experienced than before, more relaxed and playing very good together”.

The Netherlands will face Norway on the final on Sunday at 17:30hs at the Jyske Bank Boxen in Herning.