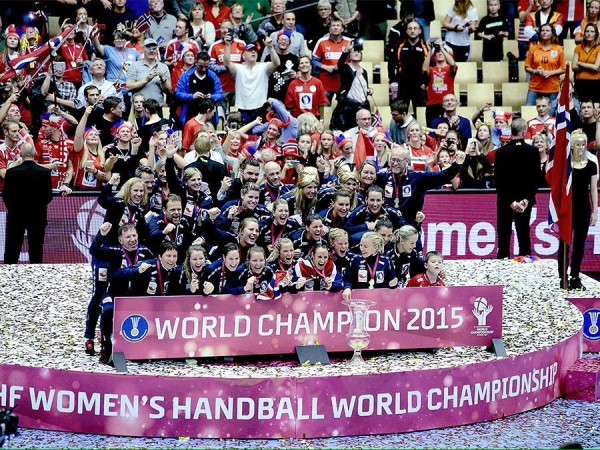 In a highly anticipated final of the 22nd Women’s World Championship Norway beat Netherlands for 23-31 in Jyske Bank Boxen and added a new gold medal to their records. This also means that the Scandinavian team re-captured the ‘Triple crown’ (Olympic gold, European gold, WCh gold).

Norway reached the final for the sixth time in history and was going for their third gold medal (Norway/Denmark 1999, Brazil 2011), while the Netherlands were completely new to this stage as they had qualified to the final for the first time ever. The conducted by Henk Groener had an amazing tournament and, according to Thorir Hergeirsson, they were favorites in the final match due to the convincing and impressive game they had displayed throughout the entire championship.

But when the teams were on court it was clear that Norway was not willing to let things slip away. The first half was simply too overwhelming for the Dutch girls, who were creating the right chances but encountered a brilliant Kari Grimsbo who saved an incredible 14 out of 23 shots (61%). After the first 12 minutes, Norway lead 4-9. The attack was flowing and the goal was being perfectly guarded, so by the end of the first half, they finished leading by 11 goals: 9-20. Although Grimsbo’s saves were providential, Netherlands was not finding their attractive game and they didn’t manage to take the better shots.

After the big difference created on the first half, Norway went to half time with certain tranquillity. The second half was more even and the Dutch showed that they were not in the final as mere spectators; they managed to break through the tough Norwegian defence and made up for themselves. As Groener said after the match: “We said in the locker room that this was not the way we deserved to finish this championship so we tried to fight back point for point”.

After the match, Thorir Hergeirsson expressed in his own discreet and quiet way, his happiness after obtaining this new gold medal, the fifth under his command: “We’re very happy. Kari Aalvik Grimsbo was the leader of the team in the beginning of the match, she took some fantastic saves and the rest of the team went along with her. The first half was the main reason why we won this final”.

He also congratulated the Dutch team: “They have had a fantastic development; we’ve been waiting for them to be in an international semi-final and they did it. I’m very impressed with their journey throughout the championship”.

Groener, who acknowledged the problems they had in defence in the first half, said that he was happy for the way the team fought back. The Dutch coach stressed: “Norway is an example for a lot of teams and also for us. We want to be where they have been already, today we lost the final but we won the silver medal and next time we’ll be better prepared and hopefully we’ll give a better fight for the gold medal”.

The captain of Norway and best centre back of the tournament, Stine Bredal Oftedal couldn’t hide her happiness and stated: “I’m really happy with the fact that we made it happen. I’m really proud of my team, the coaches, everyone. I think we made an almost perfect championship and I hope that we continue this way for lots of years”.

Heidi Loke, owner of six gold medals with the NT jersey, confessed that “today’s first half was one the best halves I’ve ever played. We succeeded in everything, the defence, Kari was pefect, and we played a fantastic attack”.