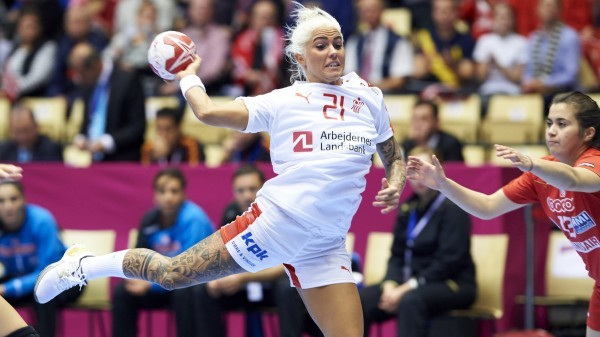 Denmark obtained their second victory of the tournament in group A, this time against the African champion, Tunisia. The scoreboard showed a final 20-32 in favour of the host nation, but the first minutes of the match were more even than what the result shows.

After a very tight fifteen first minutes of the first half (5-7), the Scandinavians finally took off. Centerback Mouna Chebbah, a well known player in Denmark, was of huge help for her team before Jorgensen decided to call a mixed defence to neutralize her job. And it worked. Thanks to an ever bright Kristina ‘Mulle’ Kristiansen and an unbreakable Rikke Poulsen, Denmark went to the locker rooms 10-16 ahead in the scoreboard, but had big difficulties trying to score past goalkeeper Echraf Abdallah. The many 2’ suspensions for the Africans was also of good help for the locals, who were supported by more than 10,000 fans, included singer and songwriter Zindy, who sings the official song of the tournament.

The second half was more dynamic and this time it was Sandra Toft the one who sent the team flying, playing with the fastbreaks, a weapon with which Denmark was able to create a greater difference. After the first half of the last 30 minutes, the score was 17-24 and the difference would become even greater. Youngster Anne Hansen, the youngest member of the team, had a great performance and made it impossible for Tunisian defence to stop her, scoring from long range and from the six meter line.

Stine Jorgensen was named MVP of the match. She, together with Kristiansen and Ann Grete Osterballe were top scorers with 6 goals each. Mouna Chebbah and Mouna Jlezi scored 5 goals each for their team.

This result puts Denmark on the verge of a qualification for the eight of finals, but they will now have to face the stronger opponents of the group, starting with Serbia on Tuesday.

In group B, China beat Cuba by 39-30, The Netherlands outscored Angola by 24-37 with a stunning performance from Estavana Polman who scored 12 out of 12 shots in 21:40 of play (she’s currently top scorer of the tournament with 18 goals); and Sweden had to struggle until the very end to get the two points against Poland, but they finally got it with a 30-31 score.

Action continues today in Kolding and Frederikshavn with these matches: