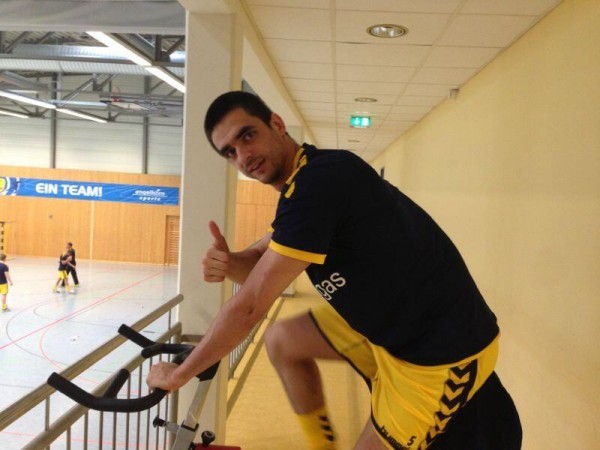 – Gym, bicycle, swimming, stabilisation, slow jogging in the last few days. I won’t back to the court before December.

Is that mean that you won’t be able to play for Serbia at EHF EURO 2014 in Denmark?

– January is still far away. I didn’t start to run yet. My leg is the only thing about which I think now.

DKB Bundesliga will start on Saturday. THE Kiel isn’t unbeatable like in previous years. HSV changed the squad and the other favorites are weaker on the paper. The only team who kept the squad and made two big transfers is Rhein Neckar Lowen. Are you ready to win the title? Is this historical chance for you?

– Despite Kiel isn’t dominant as before, they are still the biggest favorites to win the trophy with SG Flensburg. HSV and Berlin have changed the rosters, but they are still TOP teams. We are in that group of five teams who will fight for the Championship. It’s difficult to say are we capable to win the trophy. It’s true that we are stronger than before, but this year we playing in the EHF Champions League from the beginning. Last season we used opportunity to gain more points in the first part of the season, because we didn’t play in Europe.

“WE ARE STRONGER THAN BEFORE”

– To qualify for the EHF Champions League. It’s not realistic to talk about title. I give advantage to Kiel, Flensburg and Hamburg. That not mean that we won’t fight for the first place.

You made balance between defense and attack. How is going with newcomers, Gorbok and Manojlovic?

– We got even more in defense with Nikola, despite that was a good part of our team with our quality goalkeepers in the last season. Also, transition is now much better. Gorbok brought to us shoot quality from back position. It was easy for them to adapt, because both of them played here and they know how things work out in the club.

Roggisch – Manojlovic. Is that defense heart of Rhein Neckar Lowen for the upcoming season?

– We have also Myrhol and Guardiola. All of them will be in the rotation. All of them are very good players. Manojlovic, Roggisch and Myrhol know eachother from before, while Spaniard is extra-quality defensive player. He plays in Spanish NT. That’s telling you the most. All the prognosis speaking about SG Flensburg as favorite for the title. That is the team with the smallest budget among TOP 5 teams. They signed still youngstars Drasko Nenadic and Bogdan Radivojevic. Even HSV coach Martin Schwalb spoke about that afterwards SG’s coach Ljubomir Vranješ said in the style that “he would say that Flensburg is favorite with four more million Euros in the budget as HSV”.  Why Flensburg?

– Their core of the team stayed the same for many years. They are playing together long time. Flensburg have strong “home court” and they playing without pressure. All handball people have only nice words about Vranjes’ work.

Are you surprised with Flensburg’s wins over Kiel in Super Cup?

– I was surprised, but Kiel need time to adapt newcomers. I don’t affraid for them…

– HSV is favorite in that clashes, so results from Berlin didn’t surprise me.

Which teams could make troubles to the “TOP 5”? Hannover and Wetzlar were the closest last season…

– Beside them, that could be Magdeburg and Goppingen. Magdeburg is always serious, they will take points from TOP 5, hopefully, that won’t be Rhein Neckar Lowen. Goppingen will have a good season. Melsungen is also better than before. That is the upper part of the Bundesliga 2013/2014 in my opinion.

In some way the rule of Bundesliga is that newcomers from 2nd Bundesliga going back after only one season. GWD Minden survived, but that is rarely…

– I don’t know too much about these teams. It was some kind of the rule. It is a huge difference between quality in first and second Bundesliga, but Minden showed that everything is possible – concludes Sesum.