Dmitrieva: "Ten years ago I dreamed of being on this team" | Handball Planet 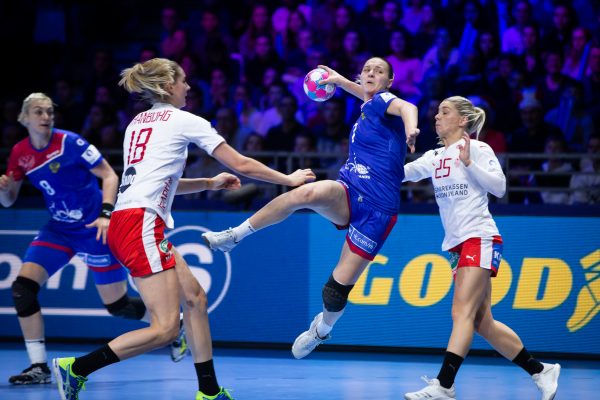 Russia are the first qualified for the semifinals of the EHF Euro 2018 in France. After beating Denmark 21-32 for their second match of the main round group I in Nantes, the conducted by Trevilof have collected 8 points in the main round and are among the best 4 teams of the competition.

With a dominant performance from beginning to end, the Russian squad secured a spot in the semifinals after a great win over Denmark. After a slow start and an unfavorable 2-1 in the first minutes of the match, Russia took of in the scoreboard with a 0-5 run that put them 2-6 ahead. Five goals from Anne Mette Hansen and Kathrine Heindahl would put the Danes 3 goals behind after 24’ of the first period (7-10), however, the difference would be of +5 for the Olympic champions at the end of the first half.

Russia started off the second half with a 0-2 that would extend the goal difference to +7. Although the last 30 minutes had just started, the match was broken. The spirit of the Danish team was not at its highest and the players conducted by Evgeny Trefilov continued to score and damage. While they suffered 5 2 minute suspensions on the second half, I looked as if the Russians had made in through the match effortlessly.

Towards the last ten minutes of the game, Denmark seemed to wake up a little and exchanged goals, but it was too far to catch up on Russia. In the end, the scoreboard showed an 11 goal difference. The top scorer of the match was Anna Vyakhireva, who scored an impressive 9 out of 9 shots. Heindahl was the top scorer of the Scandinavian team with 5 goals. Goalkeeper Anna Sedoykina was named best player of the match, she finished the encounter with an outstanding 41% save rate (14/34 saves).

2008 was the year in which Russia qualified for the semifinals for the last time in European championships. Daria Dmitrieva, current team captain of the Russian squad, was a 13-year-old girl who looked at that national team and had dreams of one time defending that jersey. “For Russia this is very good, we have one match left with Sweden and we need to play good because this championship is very strong, every team is strong. Today we played good, but I hope after tomorrow we will play good too”, said the 23-year-old.

Dmitrieva, who was providential for the Russian success so far, expressed her feelings when remembering her childhood dream: “Ten years ago I dreamed about this team, I watched it and dreamed of being in it and now I’m very happy that I captain it, this is very, very cool! I’m happy because my team has 8 points and we’re going to the semifinals”. The Lada Togliatti centre back stressed that however ‘easy’ the match looked, it was not like that for them on court: “It was not easy today. We looked at the matches and we saw how Denmark plays, we looked at some players, like right back (Mette) Tranborg who is very good. We played a lot like this (does the gesture with her hands as if she was pushing someone), up, and we played very good in defense”.

Regarding the chances of to win the European championship for the first time, Dmitrieva confessed: “It’s a very big chance to win, we want to play good in the semifinals and then the final and win…”.

Russia’s last match of the main round will be on Wednesday against Sweden who are still on the race for the remaining semifinal spot with more than a rather complicated panorama ahead as they depend on many results.