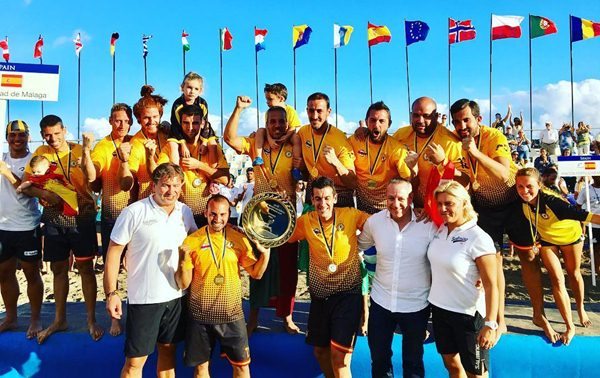 After four days of competition, yesterday afternoon finnished III EHF Champions cup in Gran Canaria. First impressions after this year’s competition are that we saw a lot of fantastic matches and that final matches in both gender competition had similar outcome: victory of Spanish teams, matches lost by defending champions and the fact that both finals were decided „on one ball“.

For last two years, Russian side „Ekaterinodar“ was team that brought „gold“ from Canarian islands to continental Europe. This time, opponent in final were „Ciudad de Malaga“, Spanish champions. Malaga already won against Russians in preliminary round and this match was kind of „copy – paste“ as again team leaded by Roman Kalasnikov, MVP of ChC, won first period with authority, but later opponents equalised. In „shoot-out“ Malaga was better and won this match 2:1 (17:28; 22:20; 6:4).

Malaga will see trophy in male, but as well in female competition, as „Deporte y empresa“ is from the same city on the South of Spain. Opponents in final were team „Multichem Szentendrei“. Again we saw „shoot out“ in match. Maybe it is important to mention that Hungarian coach asked for team time-out just one second before the end of the second period, when his team leaded four points and had ball posession. This unfair-play decision maybe took luck from his team and brought it to Spanish girls in „shoot-out“ when decisiv was last attempt and one missed shot from one to another goal. Final result: „Deporte y empresa“ – „Sentandrei“ 2:1 (15:12; 19:23; 6:4).