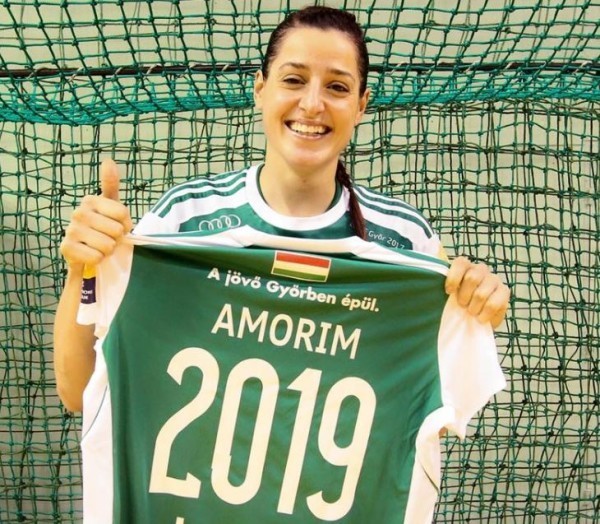 Last week Brazilian left back Eduarda Amorim renewed her contract with Györi Audi ETO KC for three more years, which means that she will complete an entire decade in the Hungarian team, where she arrived in 2009 and with which she obtained 5 Hungarian Leagues, six Hungarian Cups and two EHF Champions League titles.

The 29 year-old told Handball-Planet.com all of the reasons why she chose to stay in the Hungarian power house until 2019.

Handball-Planet.com: –During the World Championship in Denmark you mentioned that you hadn’t sat down to discuss your continuity with Györ yet, did you receive any offers from other clubs? If so, why did Györ’s proposal prevailed?

Eduarda Amorim: –Yes, I have received offers from other clubs, but Györ was my first choice. First of all, because it’s a team that always fights for the titles, and then of course, the fact that I’ve played here for so many years and that I’m already adapted to the club, the coach; I still feel motivated to play here. I didn’t really have any reasons to change, I have everything I look for as a professional here in Györ.

HP: -By 2019 you will have completed an entire decade playing for Györ, but what have you learned from this experience so far? And how does living in Hungary also helped you to make the decision to stay?

EA: –I have learned a lot, when I first arrived I was just a good and talented athlete, but as time went by, I’ve learned to have the consistency that a top athlete needs. Györ has given me all I needed to achieve this. It was with good trainings and with a high number of matches in several competitions that I was able to be my best self and to reach the highest level. Life in Hungary is good in general. Although it might be a bit quiet, there’s always something different to do. Being far from my family and friends is not always easy and it’s something I don’t think I will ever get used to; but it was really because of handball that I decided to stay.

HP: –After having received the 2014 IHF World Player of the Year award in Herning you mentioned that one of your main objectives was to be back to the top, how does being in Györ contribute to that?

EA: –Yes, definitely. It was with Györ’s contribution that I was able to get to the top after the injury (Amorim had a torn ACL in November of 2014). The quality of the trainings and of my teammates help a lot to that. I’ve always been very determined and will continue to be (in order to be back on top).

HP: –Regarding the EHFCL quarter finals, you will meet FTC Rail Cargo Hungaria, a classic also in the domestic competitions and current Hungarian champions, what do you expect from those clashes?

EA: –They will be tough games, that’s for sure. I think FTC is a good team, but I also know that we have what it takes to win. We have a great motivation to be in the Final 4 and get a new title for Györ. 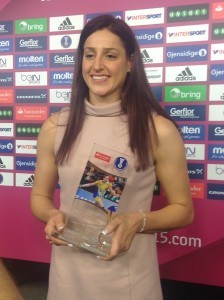 ‘Duda’, with her 2014 IHF World Player of the Year award in Herning.

‘Duda’ is already in Austria along with the Brazilian national team, where they will hold a training phase at Austrian club Hypo Nö until March 16th, when they will depart towards Norway, where they will play a 4 Nations tournament against the host nation, Spain and Germany.

Both the training phase and the tournament mark the reunion of the team conducted by Morten Soubak after the early elimination from the World Championship in Denmark. The Serbia 2013 MVP believes that the preparation for Rio 2016 begins with these phase of trainings: “The tournament will be very positive for Brazil. This is like the beginning of the Olympics for us and we have to take advantage of every minute that we’re together. We need to improve everything that was wrong during the World Championship and start putting it into practice from now. We all know that this might be the last chance to win something big for Brazil”.

The statement is based, according to Amorim, on the inevitable retirement from some of the most experienced players, like captain Fabiana Diniz, who has already announced that she will stop playing the sport after the tournament in home soil; and the lack of readiness of the younger generations, who might not be ready to help maintain the level that this team has shown for the past few years: a serious contender in every ecumenic competition.

Amorim’s performance so far in this 2016, particularly on the EHFCL Main Round, shows that she’s back to top shape as she’s been decisive in both ends of the court, more than ever since her comeback. Her renewal with the two time EHFCL champions brings hope for both the team conducted by Ambros Martin and handball fans around the globe.