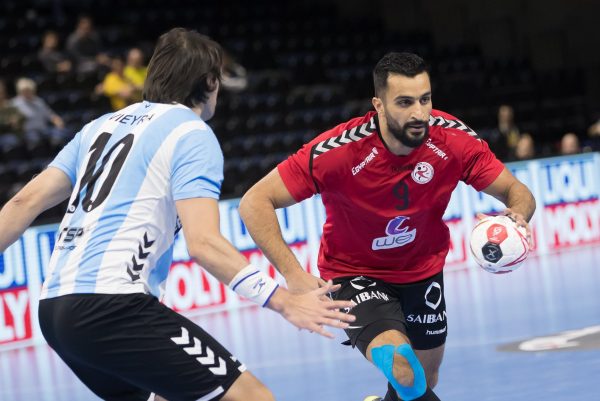 In a match “played with the hearts more than with the hands”, as David Davis himself mentioned during the press conference, Egypt defeated Argentina 20-22 and have put themselves back in their feet after two defeats on the previous matches.

Tension could be felt in the air of the Royal Arena. Both Egypt and Argentina were playing a decisive match in their aspirations to continue on the race for the main round berth. And, of course, as it usually happens on such tight matches, imprecisions from both teams arose. The African runner’s up took the lead 2-4 after 13 minutes, but based on a very tough defense, Argentina were able to catch up and even turn the scoreboard in their favor 8 minutes after (7-5) with a three goal run from Federico Fernández, Pablo Simonet and Ramiro Martínez.

The South Americans, with a very good performance from goalkeeper Matías Schulz, went to the locker rooms 9-8 ahead. However, despite having finished the first period with high spirit, a series of mistakes in attack caused Egypt to take the lead and Manuel Cadenas called for a timeout after only 5 minutes as they were down 9-12. With two players less, Sebastián Simonet, who finally had some minutes after a back pain molested him on the first days of the competition, stole a ball and scored to put Argentina 11-12 in 12 minutes; and from then on, the match became more and more spicy.

Both teams took the lead at some point during the last part of the second half, and Argentina, who had a hard time finding the net, also committed some mistakes that would cost them a lot during the last moments of the match, as they couldn’t keep the lead when they had it. Federico Fernández saw a red card after a dangerous defensive action against Yehia Elderaa, and after a video replay, he was shown a blue card, which will keep him out for at least one match.

With 2 minutes left to be played, with Egypt leading 20-21, a polemic play ignited the match. Elbow in the face from Ibrahim Elmasry to Sebastián Simonet, pass from the Argentinian to Gonzalo Carou, who shot to goal from the six-meter line, but couldn’t score. Two of the Egyptian players were clearly stepping inside the area when Carou shot, however, after giving a 2-minute suspension to Elmasry, the match resumed with a throw from goal for the African team, instead of calling a 7-meter throw. The Argentinian team exploded in anger and Simonet also received a 2-minute suspension. A penalty scored with less than a minute put Egypt two goals ahead and there was no more time for Argentina to come back.

In a clear state of discomfort, Cadenas expressed his feelings after the match: “What can I say…both teams played in the same level, fighting for the victory until the end. Egypt got the victory in the last part because they were better than us, but maybe I am very upset with the referees, only for one action that for me was a very decisive action. In this action, after the 2-minute suspension, there was a 7-meter throw, clear. I don’t know why the referees only use the video replay for one team, because it was a very important moment. And from then…I think that changed everything. I think both teams deserved the victory but in the end they were better than us”.

Karim Abdelrahim, who was chosen player of the match, stated: “It was an important game for us. Yesterday it was a difficult moment, and the first match against Sweden, of course, and to have a match in less than 24 hours, it was hard to wake up. We did what the coach said, we tried to fight until the end, the match was equal, you could not know who would win in the last minutes. So, we did what we can do and we will stay fighting until the end, as people know Egypt never gives up”.

Regarding their first victory of the tournament, coach David Davis said: “The match was crazy. Both teams played more with their hearts than with their hands. Anyone could’ve won this match, we could’ve even tied. We lost against Qatar yesterday and everyone was vey sad, and we just wanted to wake up and move ahead, and it was so complicated…in the end we won the match, but Argentina could also win it. This was not maybe a good match in terms of handball, there were good moments, of course, but it was a match in which both teams looked desperate, us for the first victory and Argentina for their chances to advance to the main round. But the team stood up, we were carrying two defeats, although the match against Sweden didn’t taste like a defeat, for the way we played; but it was important to stand up again, there was not time to lament, we needed to stand up and try to play well.