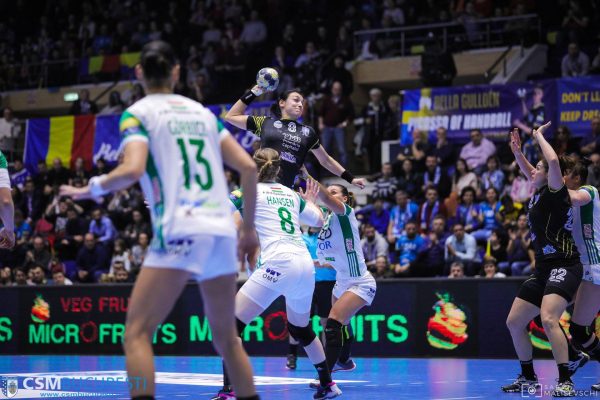 When CSM Bucureşti and Győri Audi ETO KC step on court today for the first semifinal of the EHF Final 4 at the Papp László Sportaréna in Budapest, fans worldwide will certainly be treated to a real handball show. It will be their third clash this season, as they have already met on the main round and took one victory each, but of course, memories from the 2015/16 final will emerge on both sides. But for Győr’s Stine Oftedal, who was still in Paris at that time, this will not be like either of the previous matches.

“I’m really excited. CSM Bucureşti have an amazing team, of course, and I’m sure it will be very tough, very close, and that’s how it should be in a semifinal of a Champions League, for sure. I think it’s a little different when it’s about the trophies. In one way, we both got to feel each other a little, and to know how it feels to play against the other one, but it is something special in the semifinals”, explained the Norwegian centre back who came back to the courts last month, after having been ruled out due to an ankle injury in late March. It will be Oftedal’s first EHF Final 4 in her first EHF Champions League season and she’s living it in a special way: “I feel it all I think! I’m super excited, I’m a little nervous, I’m happy, so it’s a good mix of everything. This is the biggest event that you can play within the club level, so it feels very special in that way. Luckily I’ve played some big games with the national team, but of course this is something new, so it feels unique and special”.

While some may think that it’s almost obvious to see Győri Audi ETO KC in Budapest once again, the curse of injuries “both short term and long term”, as clarified by Oftedal who was also injured herself, made it difficult for the girls in green to reach this final weekend. However, the Norwegian team captain sees the bright side and acknowledges that overcoming such hurdles is one of the team’s positive aspects: “I think this is for sure one of our strengths. We’ve played with different players almost every month and that is a little special, because still we managed to produce the results so far. I’m actually really impressed to be a part of something like that and to see how it is still possible to produce results and to be formed well, that is a strength for sure. It says a lot about the team and the qualities within the team and within the staff”.

An inevitable question came up from one of the journalists in the Media Call that took place in Hösök Tere, the Heroes’ Square: “How will you stop Cristina Neagu?”. And the answer came gracefully. “That’s never easy at all, to be honest. But we just have to be tough with her, try to make it hard for her to get her timing, because once she has the timing she’s the very best, so we just have to be smart”.

Three time Champions League champion Eduarda Amorim also knows the importance of the Romanian’s presence on tomorrow’s match and she stressed: “I think the match will be decided on the details, if we can manage to make a good defense, especially against Neagu, we can get the victory tomorrow”. When the reporter mentioned that everyone was talking about the three time IHF World Player of the year, Amorim responded: “How can you not name her? She has a bad match and she scores six goals, so how can you not say her name? If she has a good match she’s terrific and everyone knows that she’s a class player, and we know that we depend on stopping her to win.”

On the other side Neagu, who had declared in an interview with the EHF that Győr were no longer the ‘bogey’ team they used to be, confirmed her thoughts on CSM’s rival for tomorrow: “I do think so, because maybe before I would have seen Győr as favorites to win the trophy, but this year I see no favorites, I think that the four teams have equal chances, so I really believe in our chance and hopefully we’ll have a good game tomorrow because we want so much to make it to the final”.

Neagu was CSM’s hottest recruit last Summer and she landed on a team that was already star-studded. After what looked like a peaceful season, with only a few weeks left for the clash against Metz Handball for the quarter-finals of the Champions League, CSM’s Danish coach Helle Thomsen was sacked. Her successor was someone who also arrived last season, at around the same time: Swedish Per Johansson. The team tied the qualification for the EHF Final 4, but not without being startled.

“It was a hard season, we had good games and bad games. We don’t know quite where we are now, if we are on those great days like against Metz at home, when we played an extraordinary game, or like the Metz away game, so probably we are somewhere in the middle and hopefully we’ll have a good game tomorrow and we’ll be in the upper side of our season”, confessed the 29-year-old.

The first semifinal throws off at 15:15hs and will see both finalists of season 2015/16 in action, fighting for a place on Sunday’s grand showdown.