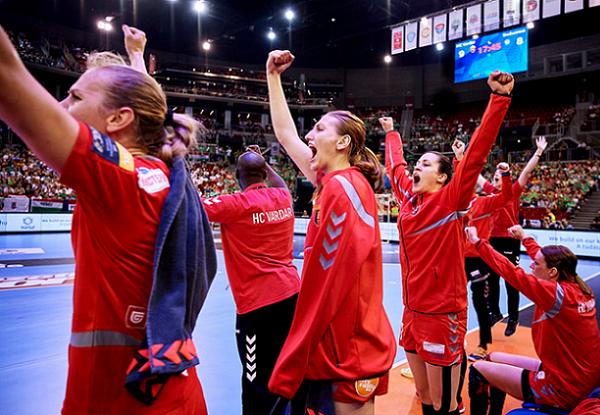 With a bronze medal that tasted bittersweet in her hand, Jovanka Radicevic confessed in front of the media: “It was very hard to come back in the game after what we experienced yesterday against Bucuresti”. How can you motivate your players, who have worked so hard for the entire season and were unable to get what they fought for? How can you motivate them for such a tough match that will only give you a consolation prize?. “It really is very complicated, but we knew from the beginning that we had to play two matches, regardless of the result of the first one. So, in theory, you come here prepared for whatever comes”, tried to explain David Davis.

Cristina Neagu’s face said it all. Trying to look impassive as usual, but visibly touched, Buducnost’s left back admitted: “It has been really hard. We’ve lost two matches out of two in less than 24 hours and we’re really not used to living something like this with this team. I’m disappointed because we have been preparing all season for these two games, and in the last months specially only for the game against Györ. We didn’t manage to win it and then it was extremely hard to motivate to the game of today”. An entire year of dedication in both the physical and mental preparation to be fit and ready for the most important two days of the season. But in the moment of truth, making so many little mistakes can separate you from the desired trophy. Is it lack of preparation, then? “The other teams say: ‘oh we have too many games, we are tired because we are travelling a lot, we have too many games…’ and Buducnost says that that is an advantage from this point of view. It’s an advantage and disadvantage, because you can’t be in a good shape, in a competitive shape for this kind of games, and then in these important moments of the match, in the little details, we make mistakes because we lack competition. We didn’t play any normal game in the last month, only against these guys but it’s like.. Pff.. I don’t know what actually gain in this kind of games, yes for sure this will be something we should regard the next season because it’s too hard to come after one month only of trainings and play two very important games in the Final4 as we did today and yesterday”.

After such an important and decisive event, a long period of thought is what follows. Regardless of the results, whether they’re positive or negative, it’s time to be self critical, and above all, recover energies to come back stronger: “We need to look forward to try to get better, because if we just complain about what we did in this tournament we will never become stronger. So we are looking forward to see our mistakes and to be back stronger next season”, concluded the Romanian star.

The first stop on this long season of reflection, at least for Vardar, was today. The Macedonian team had the need to show what they’re really made of. With their team captain on the bench, due to an injury that will require surgery, the team from Skopje really stepped up and played just like they did during the season. In a match where the motivation was hard to find, they’ve found it a little bit faster than their rivals. “We had to show who we are and that we can play in a high level, because what happened yesterday on court does not define us at all”, assured a tired Radicevic, who, just like Neagu, can’t wait to disconnect from handball to come back with more energy.