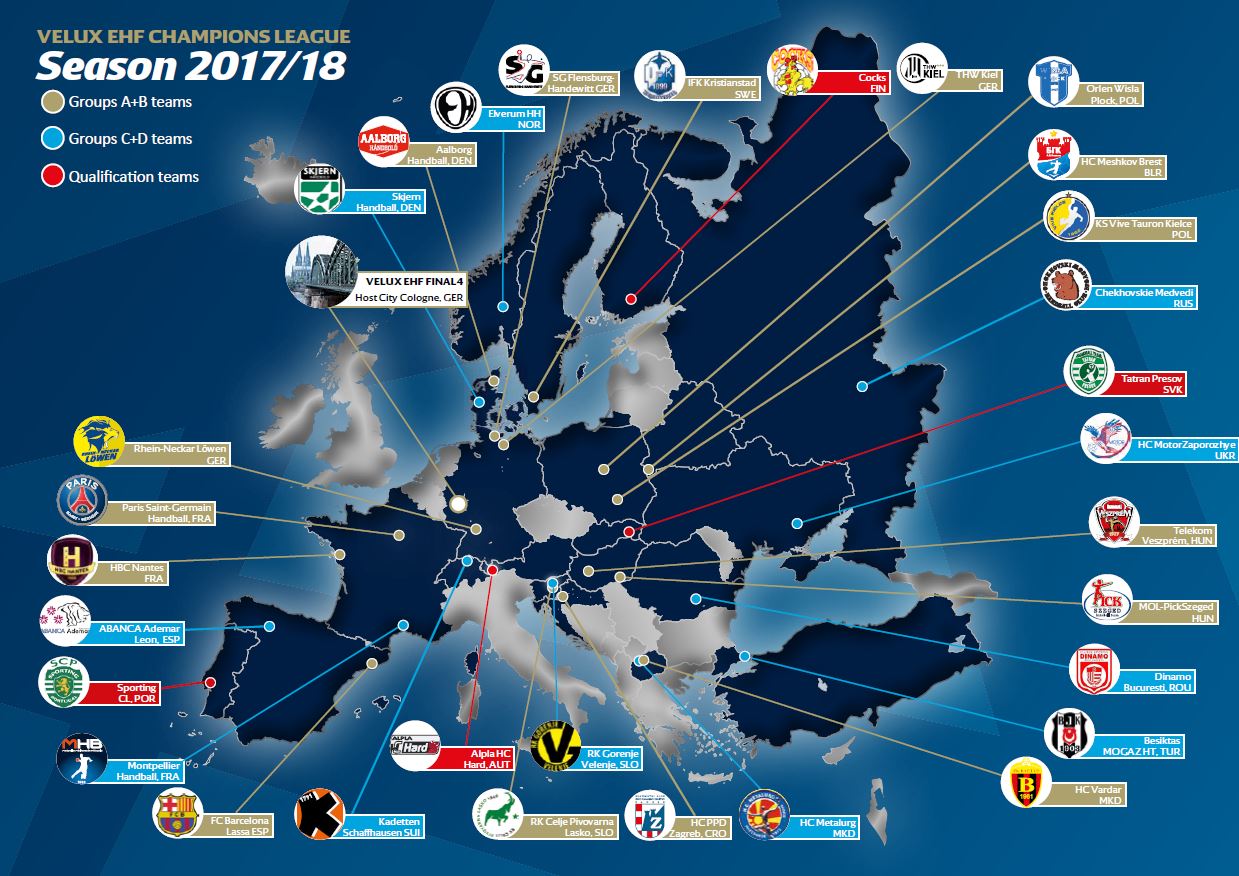 Following the qualification of three German teams to the Last 16 of the VELUX EHF Champions League 2017/18, the EHF has issued the following statement to avoid any misunderstanding or incorrect information and to ensure transparency in the decision-making process relating to the scheduling of the Last 16 matches: THW Kiel versus MOL-Pick Szeged and Rhein-Neckar Löwen versus PGE Vive Kielce.

• The 2017/18 calendar was confirmed two years ago in agreement with national federations, leagues and the EHF’s internal commissions. This included an agreement on the playing period of matches in the VELUX EHF Champions League from Wednesday to Sunday.

• In the scheduling of matches in the VELUX EHF Champions League, the EHF/EHF Marketing GmbH must take into account the availability of arenas as well as the TV situation in each market and its media contracts in each country.

• Ahead of the 2017/18 season, the German Handball Bundesliga (HBL) decided to schedule the match between THW Kiel and Rhein-Neckar Löwen on Saturday, 24 March 2018. The EHF was neither involved in this decision, nor was it informed and only found out about this decision from a newspaper interview with the HBL managing director.

• The current scheduling problem in the Last 16 was foreseeable, given that three German teams are playing in the VELUX EHF Champions League, but was not taken into account by the HBL.

• Following the results in the final round of the group phase, the EHF and EHFM sought to coordinate the playing schedule together with the three German teams and their opponents. It became clear, however, that the first leg matches of THW Kiel and Rhein-Neckar Löwen would not correspond with the playing schedule of the HBL.

• Given the availability of arenas and the TV situation in Poland and Hungary, as well as the priority that is given to the home markets, the result was that the Last 16 matches could only be scheduled on Saturday, 24 March (proposed times: 16:00 hrs in Kielce and 18:00 hrs in Szeged) at the same time as the HBL match between the two teams.

• A proposal to play the matches on Sunday, 25 March 2018 was rejected by the EHF. In making the decision, the EHF considered the health of the players and the demands of playing two top-level matches over two consecutive days. It also took into account the severe criticism of the EHF by representatives of the Rhein-Neckar Löwen club in November 2017, following the scheduling of the club’s group phase match against FC Barcelona Lassa, even though the proposal to play on Saturday, 11 November 2017 in Leipzig (HBL) and the next day in Barcelona (VELUX EHF Champions League) had come from the club itself.

• Within the possibilities available, the EHF informed the clubs involved that either the regulations had to be followed or it was possible to switch the ‘home right’ of the teams, which would see the two German team play their second leg matches away from home.

• The EHF received the decisions of the two clubs, with THW Kiel deciding to play the first leg at home and Rhein-Neckar Löwen accepting the proposed playing schedule.

The Last 16 fixtures have therefore now been confirmed by the EHF as follows:

The EHF would like to underline that the early scheduling of the international calendar was put in place at the request of the leagues and its coordination, taking into account the major events on both European and world levels, is a major challenge for the federation.

The EHF and EHF Marketing GmbH have always done their best to offer as much flexibility as possible to participating clubs in the scheduling of matches, a policy which also extends to German clubs, but the federation has a responsibility to take into account the requirements of all clubs within an overall European context.