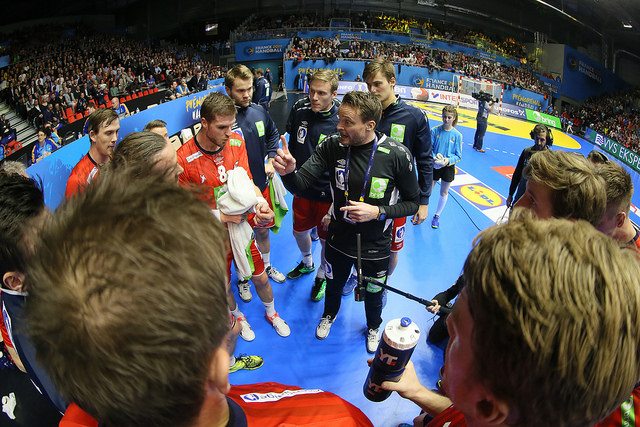 Norway debuted on the Gjensidige Cup in Oslo with a 31-25 victory over Iceland, in the warm-up for the upcoming men’s World Championship in Germany/Denmark. On the second match of the day, Brazil defeated Netherlands 32-35.

In a match that was very tight from the beginning, the home team ended up taking the 2 goal lead to the locker rooms. But it took a lot of effort to get there. Team captain Bjarte Myrhol established the 8-7 lead after 12 minutes, and from then on Norway would not let go of the lead; only three minutes later they would establish the first 2 goal lead of the match from either team (9-7).

The appearance of centre back Gisli Torgeir Kristjansson was good news for the Icelandic, who were able to come back from a 4 goal deficit (12-8). The 19-year-old stepped on the court and brought freshness to the attack, helping Iceland reach the last minute only one goal behind (15-14). A last posession for the Norwegians allowed them to stretch the 16-14 after the first 30 minutes.

On the second period, Norway extended the lead to 4 after the first 4 minutes (19-15); the entire half would be dominated by them. Sander Sagosen scored another 4 goals to complete a total of 8 on the scoresheet (he would later be named best player of his team). After the first 20 minutes, Iceland was still at a considerably small difference (26-23), but they were unable to get any closer and Norway would stretch the gap to up to 7 (30-23) with 5 left to be played. The final score was 31-25 for the home team. Kristjansson, who scored 4 out of 4 times, was named best player for Iceland.

Brazil and Netherlands played the last match of the day at the Oslo Spektrum with the South Americans winning 32-35.

The tournament will continue on Saturday: Brazil will meet Iceland while Norway will face Netherlands. The last day of competition will be Sunday 6th and the first match will see Iceland facing Netherlands while the hosts will encounter Brazil. These last two days of competition will take place in the Nordtrand Arena, in Oslo.

Norway will be in group C in Herning along with co-hosts Denmark, Austria, Tunisia, Chile and Saudi Arabia. Iceland will share group B in Munich with Spain, Macedonia, Croatia, Bahrain and Japan; while Brazil will compete in group A in Berlin with France, Russia, Germany, Serbia and Korea.