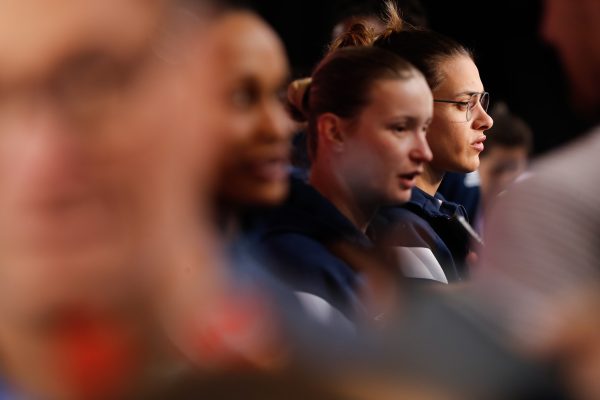 She may have not been named the best player of the match last night, but on papers, Laura Glauser really showed her credentials. In 28 minutes on court, she stopped 50% of the shots (9 out of 18). The 25-year-old made it back to the national team after having giving birth to her first daughter last March. The French gardienne confessed how tough of a final she thinks her team will face tomorrow in the AccorHotels Arena.

“It will be really, really hard, for sure; they will not just give us the medal like this”, said the Metz goalkeeper as she raised her hands and pretended she was handing someone a medal. “Our defense for sure will be our rock, we need to be focused, to be stable, to be strong and not to fall if we make some mistake; we need to be ready from the first to the last second and to give all the power that we have”.

HP: How do you think the crowd will help?

HP: But what was it like to play in front of such a supportive audience?

Glauser: “Oh, it was just wonderful. I was wowed, and one time I did like this (raises her arms and moves them up and down), like saying ‘c’mon supporters!’, and they replied with a scream and I was just like ‘woooow! It was amazing and I hope that they will continue to support us again until the end”.

While for some it may have been given that she would make her comeback to the courts after having becoming a mother, she was not always so clear about that: “In the beginning it was really hard, because a baby changes your life, your routine, a lot of things, so in the beginning I was like ‘Oh my God, I will never come back, it’s so hard, I can’t even stand up to walk’, so it was really hard. But then afterwards I found power, my daughter gave me a power I didn’t expect, so I just want to fight for her, for my family, for me and I love to do this, so I could not miss this, I did not want to miss it!”

HP: And how was it for you to come back in the end?

Glauser: “I felt really stressed when I came back, because I didn’t want to disappoint my team, the coach and friends because I think they expect a lot from me, but I was so happy and glad to be a part of this team and to be in this competition now. In the beginning I had some trouble, because pregnancy changes your body, of course, but I made a re-education, I made all the things I had to, I didn’t come back so fast, I took my time to put my body on the road again”.

Because of her pregancy, she was not able to be in Germany last December, when France obtained their second World Championship title. However, she looks back at the title with happiness and not a stint of jealousy or regret.

“About last year, yes, I was really happy for them, I was really proud of them, I didn’t feel any jealousy or anything like this. Because people asked me ‘are you not…jealous?’ but no, that’s not the word, they were all like ‘oh, sorry that you weren’t there’, and I was like, no, I was there to support the girls and I was so proud and happy for them. And me, I lived something really wonderful in my life, so I was happy for them and now I’m happy, I’m proud to hold the colors of France, this is just, wow!”, confessed Glauser.

While she was reluctant to talk about herself and the experience so far on the tournament, she preferred to talk about the team work: “I will not speak about my performance, but I want to speak about the performance of my team. I think we were just like one, all the team was one player and I was so glad to be behind our defense, that was really good and I think we gave all that we have to be good and I hope tomorrow it will be like this”.

Glauser: (interrupting) “No, no, not at all. At the beginning I was just running after the ball and, aaaah, having fun, but I didn’t expect this, not at all”.

HP: So when someone reminds you you are Olympic medalist and you’re on the verge of becoming a European champion, can you believe it at all?

Glauser: “No, because I think I will believe it when I quit handball. I think I will sit down on my couch and think ‘wow, you did it!’ (laughs), but right now I’m just enjoying and I’ll take what’s coming and we’ll see. I’m just like this, I don’t like to think far away”.

When France steps on court tomorrow, whatever the outcome, it might take a while until Glauser realizes what happened, but she will certainly know she will go back go to something more precious than the medal on her chest.