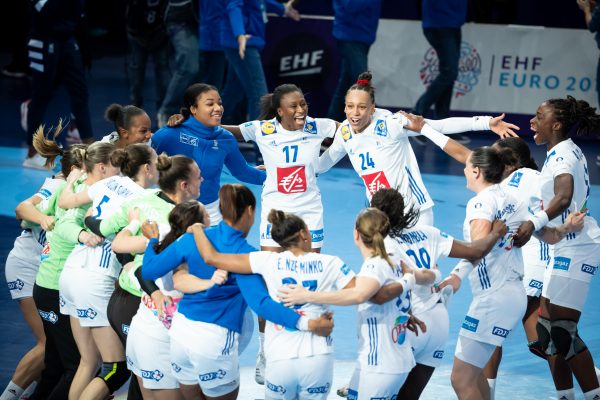 France are in the final after beating Netherlands 21-27 in the second semifinal in Paris. The hosts will face Russia, in a re-make of the Rio 2016 Olympic final on Sunday at 17:30. The Dutch will face Romania in the fight for the bronze from 14:00.

In an AccorHotels Arena with more than 12,000 spectators, the home team proved too strong for a tired Dutch team who nevertheless fought until the end. The French took a three goal lead after 11 minutes (3-6) and while it seemed as if they would extend it even more, the conducted by Helle Thomsen fought back and caught up; despite some shots on the posts and a few lost balls, they managed to reach the half time buzzer only one goal behind (11-12).

On the second period, Netherlands draw the scoreboard in 14, after nearly 5 minutes. Injuries from left wing Martine Smeets and Jessy Kramer, (who played as line player in absence of Snelder and Broch) left Thomsen hands tied, limited to face the World champions with a hurt and tired squad. Then France’s rotation started to pay off. The coached by Olivier Krumbholz extended the lead by 6 after 14 minutes (15-21) and the match looked broken. Laura Glauser’s 50% save rate was even more impressive compared with the low performances of both Tess Wester and Rinka Duijndam.

France’s tough defense proved to hard for the Dutch team, who were able to score only 10 times on the second half. In the end, the Olympic silver medallists took the victory and celebrated with an enthusiastic and supportive audience that will certainly pack the AccorHotels Arena again next Sunday. Estelle Nze Minko was the best player of the match, with her 100% of efficiency in six shots; however the top scorer of the match was Lois Abbingh, who netted 7 times.

“We are very happy to play a new final against Russia, but I hope we win this time”, said an efusive Alexandra Lacrabere after the match. The right back was clear about the keys for Sunday’s match: “We must have a very good defense, just like today, we need to step up strongly, and do not let Vyakhireva and Dmitrieva play freely. If we can do this and run faster than them, we can win it, especially with this audience supporting us”. And regarding the feelings of playing in such and exciting atmosphere, the Fleury player stressed: “We felt really good playing with these crowd, because they give us an extra power”.