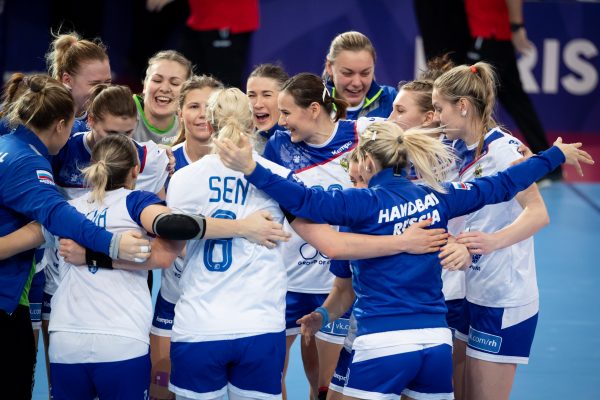 The Olympic champions were too much for the Romanian squad and won 28-22 on the first semifinal of the day in Paris. The conducted by Ambros Martin played a very good first half, but could not cope with the Russian power on the second period.

It’s been a hard couple of days for Romania. Losing their best player right before qualifying for the semifinals really put them in a difficult situation. Russia, on the other hand, were coming strong. Don’t mind the loss againtst Sweden on their last match in Nantes, they saved some power for this semifinal, as Daria Dmitrieva said on Wednesday.

The match, however, started better for those coached by Ambros Martin. After a very tight start, Romania were able to create a 3 goal difference and after 16 minutes were leading 6-9 and playing with confidence. Long range shots were sharp and effective. But Russia made some adjustments in defense that allowed them to catch up 12 minutes after (12-12). In a close ending, the first half was favorable for the Russians, who went to the locker rooms with a 16-15 lead.

When the match was resumed for the second period, Russia had improved their defense and quickly put themselves 19-15 after 3 minutes. Romania found it hard to score now and was only able to reach theit first goal after 7 minutes (19-16). Cristina Neagu, who was watching the match from behind the goal, with the rest of the Romanian staff, continued to cheer for her team, but after being as close as two goals behind, Russia had a 5-0 run that put them 8 goals ahead with 9 minutes left to be played. The match was completely broken at his point and Russia celebrated at the final buzzer.

Anna Vyakhireva was named best player of the match, and it certainly couldn’t have gone for anyone else as the 168cm right back scored the impressive tally of 13 goals in the semifinal that brought Russia back to a European final after 12 years.

Right wing Iulia Managarova couldn’t find words to describe her happiness: “I recevied a lot of questions about my feelings and after a match like this you cannot really understand what you’re feeling, it’s like happy, and you are empty, but it’s a great feeling”.

HP: And feeling this empty, how long will it take you to recover for the match in two days time?

Managarova: “Well, I feel empty in a good way (laughs) because all of your feelings explode, you know? We have one day more to rest and recover”.

HP: How did you manage to turn the match around already on the first half?

Managarova: “Actually a first half like this is normal for this teams, for this games (semifinals), because we are the four best teams and they all deserve to be here. It’s all the time fighting and maybe not a really good performance, but on the second half, I was happy that we reached this result, got rid of the nervousness and made a good score”.

Ambros Martin looked visibly upset after the semifinal in which his team lost the chance to go for the gold medal: “Our tactics were not so good today. Our tactics were not thinking in the offense, but to create them problems in the defense and they scored so many goals. And of course in the second half happened that our level in offense was not as good as in the first half and that’s why the Russian team took the advantage, especially on the first minutes, when they took the leadership of the scoreboard really easy and then it was almost impossible to come back because they played with the scoreboard in their side”.

Despite his disappointment for having lost the match, the Spanish coach highlighted the fighting spirit of his players: “I have to say, it doesn’t matter what happened today, or what will happen the day after tomorrow, but everybody knows that these Romanian girls are fantastic, are amazing and they are doing a very good job. And today we tried, we put everything on the court, but Russia did it much better, that’s why we are also satisfied because we played against a very good team. We did everything and more, but we couldn’t today”.

Russia will play the final of the European championship on Sunday, their second since Sweden 2006. The coached by Evgeny Trefilov have never been European champions, and that’s the only title they lack after having obtained gold in World Championships and Olympic Games. Romania will have to fight to enter the podium when they play for the third place in two days time.