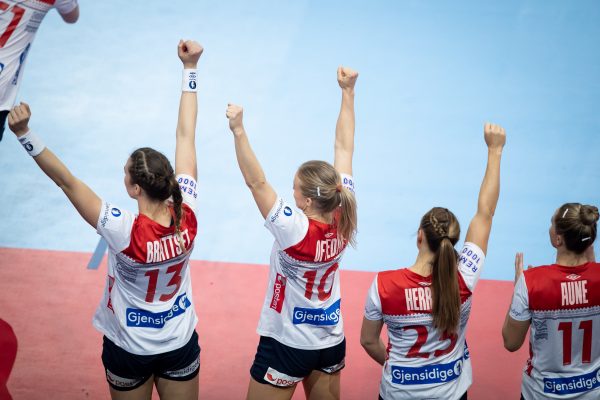 Norway steamrolled Sweden on the match for the 5th place of the EHF Euro 2018 and took the victory after winning 29-38. It was the second time in the history of the EHF Euro that the Norwegians did not reach the semifinals of the tournament. Stine Oftedal confessed: “It’s bittersweet”.

When Norway and Sweden stepped on court this afternoon in the AccorHotels Arena in Paris, they were definitely not doing it in they way they would’ve expected before the beginning of the tournament. The Scandinavian nations faced in the match that decided the 5th place of the European championship.

After 14’ minutes of the match, the teams had already scored 20 times as they were tying 10-10. It was an exchange of goals, but neither defense seemed to appear. Thorir Hergeirsson had requested a time-out as Sweden had equalized a match they were leading by three, and from then on, Norway stepped on the gas pedal took off in the scoreboard with a deadly 0-7 run; after 22’, they were leading 10-17. The first period ended with an impressive 14-22 that could have well be the final score of the match.

Sweden were lacking the presence of one its key players, Isabelle Gulldén, who did not arrive in the championship in top shape and did not play any minute, just like team captain Sabina Jacobsen was also sitting on the bench. The Swedish squad tried to fight back, but they were already too far on the scoreboard as Norway kept on scoring. After 22’, the difference was of 9 goals (24-33) and the only field player who had not scored was Silje Waade, who was playing mostly in defense. Siófok’s goalkeeper Silje Solberg finished the match with an impressive 50% save rate (18/36) and was named best player of the encounter. The top scorer of the match was Sweden’s Anna Lagerquist, who scored 7 times.

“Our performance was better than a 6th place”

Henrik Signell looked disappointed after the encounter, but was able to reflect on the good things the tournament left for them: “We had lots of problems with injuries, some of them from before the tournament, and during it. And we were one goal (thinks)…if we would’ve won against France, when we were three or two goals ahead, we would’ve been in the semifinals. But of course it’s the small things that made the difference. But our performance, if we don’t look at the results, finishing in 6th place, it’s ok, but our performance is better than a 6th place in this circumstances I would say”.

Despite being somewhat content, Stine Bredal Oftedal confessed having a weird feeling after the match: “It’s a little of mixed feelings, we had this problems in the beginning and that kind of eneded up defining our championship, I think that’s the hardest part about it, but itis how it is. It was still good to manage to play in this arena, to have this audience and everything, it was a very good experience anyway. But of course it’s not like I’m running around either (laughs), but it was a good experience”.

HP: What’s the balance you make of the tournament? Is it possible in any way?

Oftedal: “In a way I think it is. I’m very proud of the way we managed to turn things around. I think we had these difficulties in the beginning, we came back from that and came really strong. We made four last matches that were on a very high level so that’s something I’m extremely proud of. It’s sad that when we see what we can do, that we did what we did in the beginning; and like I said, that was something so defining for our championship”.

HP: The next WC will also have this main round format, how are you feeling about it?

Oftedal: “Oh, wow, I didn’t know (laughs), I think it’s fine. I think for us it’s just a matter of finding those small things that makes us…I don’t know, even more prepared for the beginning as well. Right now I’m still not sure exactly what happened with us, it’s a little strange, especially like this feeling of not having enough intensity in the first game but I’m pretty sure that we’ll figure it out”.

HP: Did you learn something from this tournament?

Oftedal: “I think when we look back it’s gonna be a bunch of things, I think first of all you see more than ever how important it is to get every single goal, to always concentrate about winning every ball…”

HP: Especially when it was that one goal that left you out of the semifinals…

Oftedal: “Yes, that one goal (she brings her arm to her chest, as if she was stabbing her heart, and laughs), and also how important it is to start up in a championship, to be completely ready both phisically and mentally. At the same time, we turned it around really good, we can look at this championship and see a lot of good matches, but it’s bittersweet”.