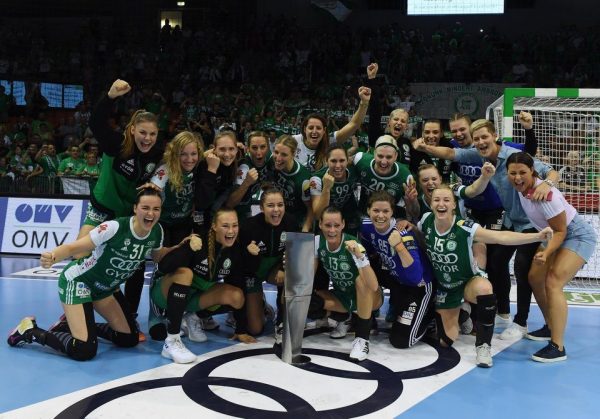 In a nerve-racking definition, on the last journey of the Hungarian League, Győri Audi ETO KC obtained their 14th title due to goal difference with FTC-Rail Cargo Hungaria, who finished with the same points, but couldn’t hold on to the championship on the last play of the match, literally. Today’s matches marked the farewell for Ambros Martín who will move to Rostov-Don and for Anja Althaus and Marija Jovanovic who retired from professional handball.

It’s been only a little bit more than a week after Győr conquered their 4th Champions League title and today they had the chance to repeat the domestic league championship and obtain the third title of the season (also won the Hungarian Cup) under the command of Ambros Martín, who is set to leave after six fruitful years in the club. A six goal difference over today’s rival Békéscsabai was done, as the match ended 34-19 in the Audi Arena. However, the other contender for the title was still playing in Budapest.

FTC-Rail Cargo Hungaria was defeating Vaci NKSE 42-23 and with that difference, they were becoming the new champions, but a penalty caused by Dora Hornyak on the last minute of the match gave the visitors the chance to reduce the gap. Although it was not important for that result itself, it could make the difference at the top of the ranking. Patricia Kovács took the shot from the 7-meter line and softly dropped the ball over Biro’s head to give Győr the goal difference they needed. The last ball of the match was for the home team and Gabor Elek called for a time-out to set the plan. With 24 seconds left to be played, FTC moved the ball and Noémi Hafrá, who had had a great match, took a standing shot from the left back position, but it went too wide; which meant that the 42-24 victory was not enough for FTC to lift the trophy.

With this new league title, the 5th under Martín’s command, Győri Audi ETO KC is only one title behind the most winner team in the Hungarian league, Vasas, which boasts 15 championships. The Spanish coach will leave the Hungarian champion after havng successfully obtained the three titles at stake this season: the Hungarian Cup, EHF Champions League and Hungarian League.

Despite the tough season, Győr has shown great integrity to face all the injuries and achieve all of their goals. This was a recurrent topic ahead of the EHF Final 4 in Budapest and something that both players and coaching staff have remarked: and far from being an excuse, we should remember that nearly 50% of the squad suffered from an either short or long term injury during the season, and the list includes Kari Grimsbø, Eduarda Amorim, Anne Mette Hansen, Anja Althaus, Jana Knedlikova, Nycke Groot, Stine Oftedal, Zsuzsanna Tomori and Nora Mørk. Finishing the season with all three titles speaks well of al the involved in the making.

Two who will be missed

Today’s matches alse marked the last in the career of two international stars of the likes of Anja Althaus and Marija Jovanovic. The German international had confirmed her retirement in the mixed zone of the Papp Laszlo Sportarena last year, after having lost the EHF Final 4 with HC Vardar, but a call from the Hungarian powerhouse made her change her mind and she kept on playing for one more year in which she lifted three titles, inlcuding her third Champions League title (the other two with Viborg HK).

Jovanovic, on the other hand, had announced her retirement from the national team last year, and accoording to an article from the EHFCL site a month ago, this was also her last season as a professional handball player: “I could have obviously stayed for a couple more seasons, but I do not want to force myself to do it. This season has been the best ever, but also the hardest, and I feel it is the right time”, she would state.