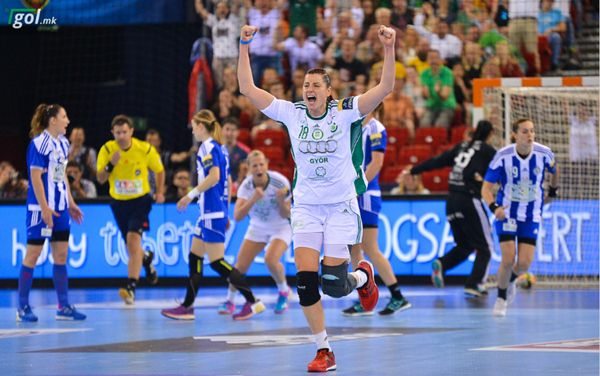 Győri Audi ETO KC have qualified for the DELO Women’s EHF Final 4 after defeating Odense HC by 33-21 on the second leg of the quarter finals. The global result was 62-49. The match at the Audi Arena also marked the return to the courts of Nora Mørk, who had spent 433 days inactive due to a series of injuries on her right knee.

In a packed Audi Arena, Győri Audi ETO KC defeated Odense HC 33-21 and booked their place at the DELO Women’s EHF Final 4. The match began just like the one played in Denmark seven days ago, tight, well fought, and with the Danish side threatening the Hungarian leadership. A goal by Ingveld Bakkerud, who had scored 11 times on the first leg match, put the 10-10 after 20′, and that would be the last goal for the Danish in the remaining of the first half.

With a great performance from Brazilian left back Eduarda Amorim, Győr managed to create a three goal difference after 22 minutes (13-10) and from then on, the gap was unsurmountable for the coached by Jan Pytlick. The first half finished with a 8 goal difference: 18-10.

It took Odense 5 minutes of the second half to finally score after a total of nearly 15 scoreless minutes (22-11), by then, the difference was too big for a miraculous comeback. Amorim continued to be on a high level, as well as French goalkeeper Amandine Leynaud, who had saved, at one point, 41% of shots (finished the match with 40%, 10 saves out of 25 shots).

There was a 14 goal difference when one of the most awaited moments occured. On the 14′ minute, Nora Mørk made her comeback to the courts after 433 days of inactivity. The Norwegian right back was welcomed by a loud and warm cheer from the audience, who were also witnessing her last Champions League match on the green and white at home, as she’ll be representing CSM Bucuresti from the next season. The Oslo-born played only during the attacks, she scored twice and helped with a cheeky assist for Crina Pintea’s 4th goal of the match on the last seconds.

The final result was 33-21 for the Hungarians, who will be back in Budapest for the fifth time in a row to claim their third consecutive title and they fifth in total. Eduarda Amorim was the top scorer of the match with 7 goals; while Nadia Offendal scored 5 for Odense.