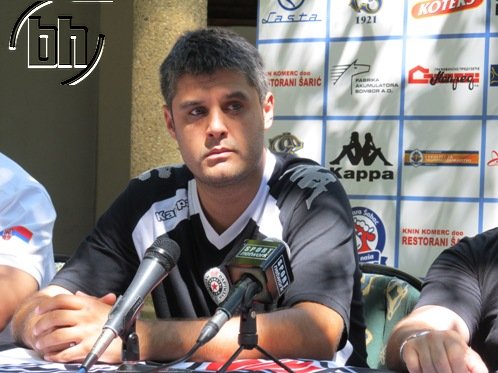 The youngest coach in the VELUX EHF Champions League from RK Partizan Aleksandar Brković has strong faith that Serbian champion will be competitive in the last three matches of the Preliminary Round. Partizan has won the third place at memorial tournament „Dragan Ranković“ in Belgrade, without the team captain Nenad Maksić and some key players as Uroš Mitrović, Nemanja Ilić and Marko Pavlović. That was the last chance for young coach to see all the good and bad sides of his squad before the clash against Flensburg on Thursday.

– I am not satisfied, but I cant be disappointed, because we were forced to play this tournament without almost „first squad“. We used the opportunity to see some players who haven’t adequate time on the court, but also young guys who didn’t play at all. We had strong rival in Croatian vice-champion Nexe in the semi-final. Despite all the problems, we were in the game until the end – 24:27. Day after in the match for the third place, our defense was really good, so we easily beat Metaloplastika 33:23. As I said, it is really hard to make right picture about our current form. Our key players weren’t even on the bench. They seated in the first row of tribune – says Brković for Handball-Planet.com

This season your first home defeat was against SG Flensburg 31:37, but on that match Partizan showed to all the rivals that they will have tough job to take points in Niš…

– We are also trying to show strong resistance in away matches. In Flensburg our biggest chance could be their tiredness as we know that they are playing Cup match two days before. Our main goal is to run well on that match. Flensburg is probably the toughest rival for us. It would be insane to say something about possible win, but we will fight until the end. I will have all the players in team, except Nenad Maksić. He is recovered after shoulder injury in Montpellier, but we won’t risk. We need him for next period, season is long. Good thing is that Nemanja Ilić and Marko Pavlović will be ready for match in Germany.

WE WILL FIGHT UNTIL THE END

– Of course, we are ready to attack Leon and HSV. We have that extra energy in front of our fans in Niš. HSV will be the favorite, no doubt about that, but we still want to surprise. We beat Ademar Leon, that barrier is broken, so there is no reason to give all the best and try to win in Spain – concludes Brković.