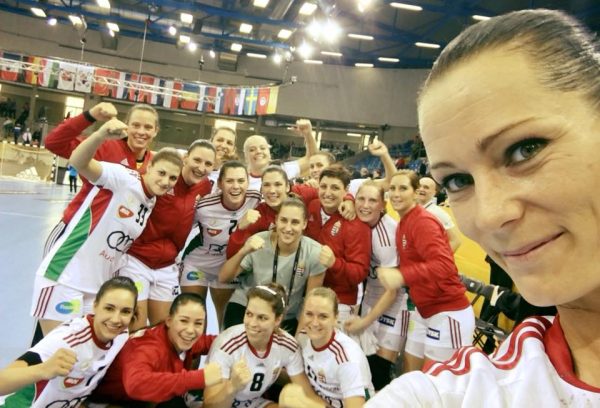 In a match full of tension in Bietigheim-Bissingen’s Ege Trans Arena, in group B, the Hungarian team obtained the two points after a victory over Poland for 28-31. The conducted by Kim Rasmussen are now through to the eight finals and will decide whether they finish third or fourth on the group when they play against Czech Republic tomorrow. Poland will play for the 5th place against Argentina.

A bittersweet feeling invaded Kim Rasmussen after the triumph of his team today. His happiness was difficult to hide, but at the same time, it seemed as though looking too happy made him feel a bit guilty. The reason for that is that he had just defeated his former team, one with which he obtained two consecutive fourth places in the past World Championships: Poland.

Both teams stepeped on court with great confidence and it was a very tough fight from the first moment, after 10 minutes the score was 6-6. From the Hungarian side, three names were the ones standing out: Anikó Kovacsics, Anita Görbicz and Blanka Bíró. On the other side of the court, it was captain Karolina Kudlacz-Gloc the one who was keeping her team alive with her four goals on the first half, which ended 11-13 in favor of the Hungarians.

The second period saw the coached by Rasmuseen stepping on the gas pedal and extending the difference to +5 after only three minutes (11-16). And three minutes later, Leszek Krowicki requested the second timeout of the match, but things were not quite working for the Polish. Meanwhile Kovacsics continued to create spaces and find the opponent’s goal and after 12 minutes Hungary was leading 16-24. Although there was plenty of time ahead, it looked as though the difference was unsurmountable for Poland, who was looking weak.

At 15 minutes, Anett Kisfaludy saw the red card after a tough hit into Gloc’s face, the blow was so hard that the Polish captain could barely stand on her feet when she was helped up from the floor. She jumped back into the court ten minutes later, and on her first action she scored for the 24-29, but time was bot enough to come back and in the end, Hungary took the victory by 28-31. The MVP of the match was Anikó Kovacsics, who scored 8 goals, the same as Kudlacz-Gloc, top scorer for Poland. The match saw the debut of Zita Szucsánszki, who replaced Gabriella Tóth on the list.

“It’s not easy, one one side I’m very, very happy for the girls, they fought very well, but I’m also very sad for Poland. Not an easy press conference for me, I want to say thank you for the game, you’ve played good games here but sometimes sport is rough and not so fair. So I’m very, very happy with the performance of our team today, both in defense and in offense”, confessed Rasmussen in the press conference room.

“We gave everything today, we fought until the last minute, we were well prepared for the entire tournament. Some of the old players knew what Kim had in mind, so we gave it all, but Hungary had more arguments today. I’m obviously very sad, we’ve done everything we could but they won and I’m genuinely very, very dissappointed”, expressed a tearful Karolina Kudlacz-Gloc.

“During the 60 minutes I only focused on one thing, winning, but as soon as the game was over that’s when the feelings hit me. I’ve done a lot of things with these girls, this federation, this country, and it means a lot to me. I would be a cold man if I didn’t feel bad for them”, closed Rasmussen.

At 18hs in the Ege Trans Arena, Hungary will play its last match against Czech Republic to define the third position in the group before they move to Leipzig for the eight finals. The Polish will define the 5th place against Argentina tomorrow at 14hs.