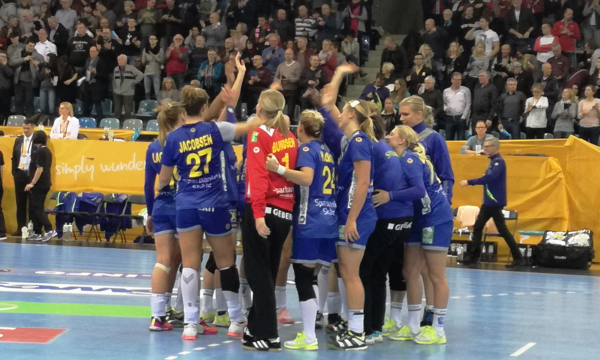 Sweden defeated Argentina 38-24 and secured a place in the eight finals with three victories in the group. Norway continue to outplay its rivals with a fantastic display of handball. This time they beat Czech Republic  by 16-34 to remain at the top of the group. The Scandinavians will face each other at 20:30 to decide the final leadership in Bietigheim-Bissingen.

It looked like an easy start for Sweden against Argentina because after 6 minutes the score was 5-0 for the Scandinavians. But the South Americans got themselves together and started to fight back. 10 minutes into the match, the Pan American runners-up had shortened the gap to three goals (7-4) and from then on, they stayed in the match mainly thanks to the response from goalkeeper Marisol Carratú. At the end of the first 30 minutes, the Europeans led 17-13.

Henrik Signell used this match to give some rest to key players like Isabella Gulldén, who only entered to throw two of the penalties throughout the 60 minutes. The performance of Filippa Idéhn (MVP of the match) was one of the keys to keep Argentina far in the scoreboard in the end, and then of course, the fast breaks product of the Brest’s goalkeeper saves. The 10 goal difference came after 14 minutes of the second period (28-18) and by the end of the match it had extended to +14: 38-24.

The bad news for Argentina is the injury suffered by one it their key players, right back Luciana Mendoza, who bent the thumb of her left hand. But other than that, coach Eduardo Peruchena was somehow satisfied with the performance of his team, particularly on the attack. “We were able to score 24 times, and we had many more options, so we’re happy for that. In this tough group that we fell into, one of the objectives that we set was to score more than 20 goals per match, we weren’t able to do it against Hungary, so I’m happy that we achieved it today”, expressed Eduardo Peruchena.

“I’m very happy about with the win, we got two points that takes us to the eight finals, that was our first goal, and we made it against a team that never stopped fighting. We had 14 scorers today, that means we have a good squad with 16 players, and it was good for us to give some rest to some of the players”, confirmed Signell.

Norway was too much Norway for Czech Republic

It was a long evening for the Czechs as they were outplayed by a relentless Norwegian squad that doesn’t seem to be shaken by anything or anyone. After the first 8 minutes the big screen showed a 2-6 in favor of the coached by Thorir Hergeirsson. A tough defense and an active Katrine Lunde (8/13, 53% saves) provided with lots of fast break opportunities that were taken to increase the difference. The first half finished with an overwhelming 7-20 for Norway. Captain Stine Oftedal, Nora Mørk and Veronica Kristiansen scored 18 of the 20 goals on the first half.

The Icelandic coached used the second half to rotate lots of the players, and the level of concentration and commitment did not slow down, despite the bulky result. Under the posts, Kari Alvik Grimsbø continued to shut down the goal and (13/22, 59% saves). The final result was 16-34 in favor of the Scandinavians, who have flatly defeated all of their contenders so far. The MVP of the match was Stine Bredal Oftedal (6 goals), while the top scorer was Mørk with 7 goals.

Tonight at 20:30hs, Norway will face Sweden on the last match day of the group stage in Bietigheim-Bissingen to define the winner of group B.