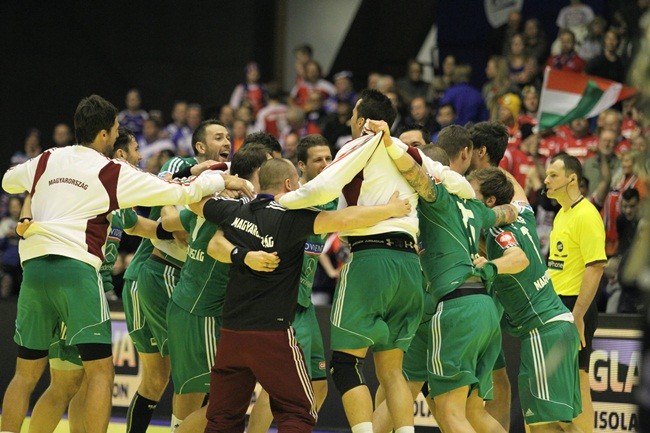 In the first match of the day Spain defeated Iceland thanks to effective play in the final minutes and so they can start the next round with 4 points. The match between Hungary and Norway was to decide the third advancing team from the group. Some Norwegian newspapers wrote that László Nagy would play but it turned out to be a false information, Hungary’s world class right-back was still out of squad with injury.

Hungarians started great and obtained a 2-goal lead, which they were able to keep until the 10th minute (6-4). Hungary’s attack was similar to that of against Iceland, Zubai fought great in Norway’s wall and was awarded penalties. Ancsin produced some big shots (mostly uneffective) and Mikler made some saves so the difference grew to three goals (8-5). After that Hungary made far too many mistakes in attack, Norway’s play vastly improved and with great saves by Erevik and goals from Kjelling and Tvedten they turned the tide. It all changed when Máté Lékai came on court for Hungary. He scored 3 quick goals and equalized. In the final minute of the first half he successfully grabbed the ball away from Norway and scored from 30 meters over Erevik! Surely the biggest goal of the match. (16-13).

Both teams made many mistakes in the second half and there weren’t many goals in the first 10 minutes of the second half. Lékai, Mikler and Kjelling were the best in this period but the difference remained (19-16). Norway then came closer and Hungary had to fight very hard to keep their minimal advantage. The final 10 minutes started with their usual 2-goal lead (23-21). Hungary’s defense wall was unable to stop Norwegian shooters but in attack Császár and Lékai provided great assists and pivot Szöllősi scored three times so Norway couldn’t get closer. Two minutes before the end Norway were one man up and they made good use of the situation by scoring twice (26-26). Hungary tried to lead a long attack, Norway couldn’t steal the ball and the scored remained.