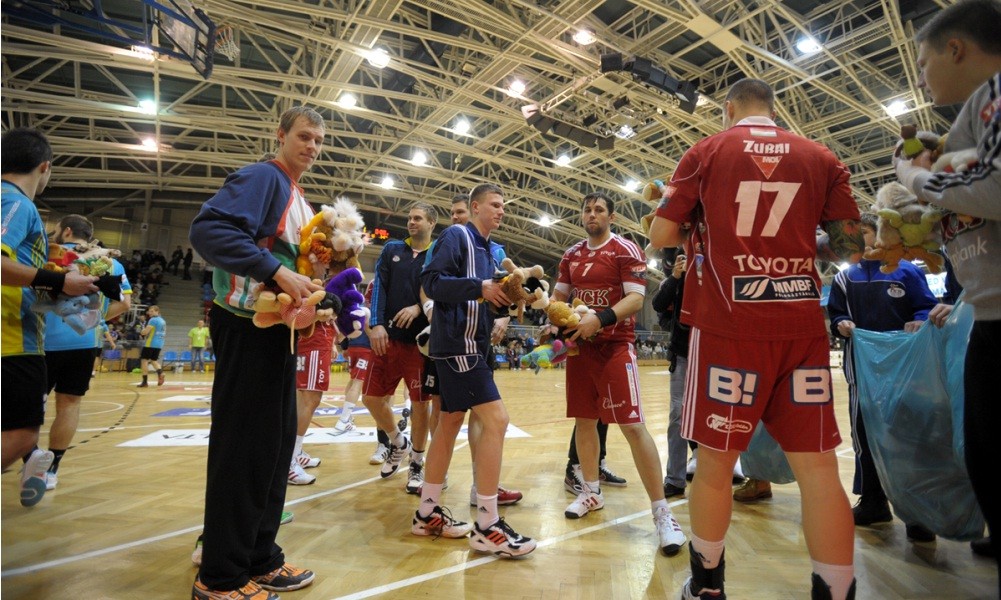 Wednesday’s Cup match was dedicated to fundraising for the Szeged Children’s Oncology Ward.  A hungarian national team shirt worn at the Olympics, signed by every player was auctioned off. Just before the start of the match spectators also threw in plenty of plush toys intended for the sick children.  The idea to make this charity event came from the team captain Attila Vadkerti.

The home team started the match at a great pace, their 5-1 defence was too big a challenge for the guests thus forcing coach Rosta to take his time-out only after 4 minutes! It didn’t help much however, Pick quickly achieved a comforting difference (9-1) with good performance from hungarian international Szabolcs Zubai and the two wings. The difference got even bigger by the end of the first half (22-11).

In the second half the complete Pick starting 7 was substituted but that didn’t really change the course of the match. Dániel Buday was fine in center with Antonio Pribanic and Zsolt Balogh scoring 14 goals. The guests even had to send in their top scorer, but he was also uneffective agains Pick’s defence. In the end the final result was 45-22 with Pick Szeged advancing to the last 8 in the Hungarian Cup.

Next day the two teams met again. The guests started better, Pick only equalized in the 6. minute. But from there goals just kept coming. With excellent play again from Pribanic and Balogh the differnce was already ten goals at half time (18-8). Pick continued to dominate in the second 30 minutes with Kekezovic, Ancsin and Blazevic scoring most of the goals.  Young goalkeeper Mihály Tóth made sure that the home team’s victory would be safe and sound. Pick won this year’s last home match 43-20.