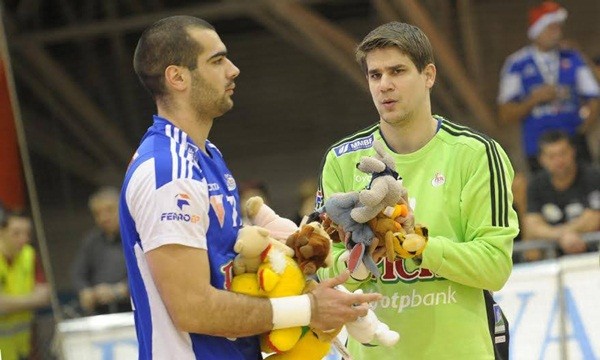 Hungarian League leaders and the only 100% team Pick Szeged played their last home match in 2013 yesterday evening. Their opponents were mediocre newcomers Győr who, just like Szeged have a Spanish trainer. Pick Szeged’s management offered the total income of the match and the plush toys throw non court by the spectators to charity.

The home team were the odds-on favourite to win the match and they started accordingly. Thanks to powerful play by Hungarian international pivot Zubai, they quickly managed to gain a substantial lead (10th minute 8-2). The guests were unable to keep the Szeged’s pace and were unsuccessful in stopping distant shots by Sulc and Balogh so the home team managed to obtain a serious lead by the end of the first 30 minutes (20-11).

In the second half coach Pastor changed Pick’s defence to a 6-0 formation and offered all his players a chance to be on court. Ancsin scored some big goals from distance, Vranjes managed to cause much trouble in the opponent’s wall and Tatai made some great saves. In some cases he was very angry with his fellow players. Due to a lack of concentration, Szeged’s defense became soft, the players made far too many mistakes so the guests were able to keep the distance at 9-10 goals.

Pick Szeged will play two more away matches this year. On Wednesday they will travel to No. 4 Tatabánya who recently signed Milorad Krivokapic and they will conclude this year against fifth-placed Balatonfüred on Saturday.