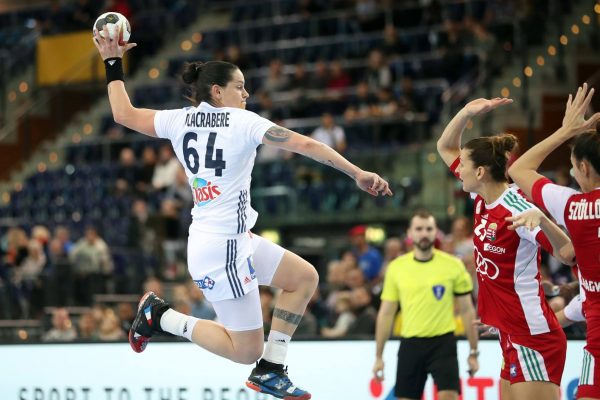 On the first eight-finals match in Arena Leipzig, France defeated Hungary 26-29 in a match they dominated the 60 minutes. Although the conducted by Kim Rasmussen did not give up, they could’t quite find the way to stop the French, who had an unstoppable Alexandra Lacrabere.

France proved to be too much for Hungary today and took the victory to access the quarter finals of this World Championship in Germany. The coached by Olivier Krumbholz had a better start and after 11 minutes they were leading 2-6, but the Hungarians reacted and with two consecutive goals from Anikó Kovacsics and a few important interventions by Blanka Biró (Hungary’s best players today), they they tied the match with 6 minutes left for the end of the first half (9-9). With the first moments of Allison Pineau on court, France took off to a three goal advantage after the first 30 minutes (11-14).

On the last period of the match France continued to score while Hungary struggled to figure out the way to stop them. Rasmussen pushed the defense to the 9 meters line, but then the French solved that playing with the line player. Kim Rasmussen would later say: “We never handled the crosses, they are very powerful and very strong in this, we knew it, but we never found the way to stop it. We were always changing, they were a little smarter in the details and so they deserved the win today”. There was a constant advantage for the French that Hungary just couldn’t reduce.

The biggest goal difference came after 14 minutes, when Gnonsiane Niombla scored for the 18-23. In the end, the silver medallists from Rio 2016 and bronze medallists from the last EHF Euro in Sweden 2016 took the two points after the 26-29 victory.

Rasmussen confessed they couldn’t find the way to solve the French attack, however, he proved to be somewhat content with the final effort from his players: “Of course I’m very proud of my girls, they gave all, they really fought, we never gave up, we kept on putting pressure on them, we tried everything we had in the bag but in the end France were a little bit smarter and a little bit better than us today”.

“We knew it would be a tough game, every time we play against Hungary it’s difficult because it’s a team that is strong in defense and we worked a lot before the game, watching videos; our attack was very, very good. Today we had Alexandra Lacrabere at the best level and that’s very important for the team, and Grace Zaadi has been very good along the competition. In defense we were strong but sometimes we have some difficulties with one or two of the young players. I hope we can play better and better, especially on the quarter finals”, expressed one happy Olivier Krumbholz.

France will now face Montenengro, who defeated Serbia 29-31 on the first eight-finals clash in Magdeburg.