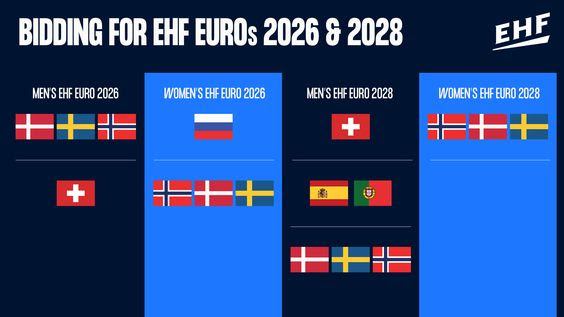 The European Handball Federation has confirmed the nations bidding for the EHF EURO events in 2026 and 2028, announced eurohandball.com.

The three nations have entered the bidding process in different combinations. In the men’s bids, the possible preliminary round venues are Herning, Copenhagen, Aarhus and Kolding in Denmark; Stavanger, Oslo, Bergen and Trondheim in Norway and Kristianstad and Malmö in Sweden. The main round would be played in Herning/Copenhagen and Kristianstad/Malmö, the final weekend is planned to be in Herning or Copenhagen.

For the women’s events, possible preliminary round venues are Herning, Copenhagen, Aarhus and Kolding in Denmark; Göteborg and Helsingborg in Sweden and Stavanger, Oslo, Bergen and Trondheim in Norway. Main round venues would be in Herning/Copenhagen and Oslo – Norway’s capital would also be the place for the final weekend.

The Swiss bid promises ‘new heights for handball’, with the preliminary round being played in Zurich, Basel and Lausanne, the main round in Zurich and Lausanne and the final weekend again in Geneva.

Russia says ‘We can’ as they bid for the Women’s EHF EURO 2026. If their bid is successful, it would be the first time that a European handball championship is played in Russia.

Two arenas each have been chosen in Moscow and Saint Petersburg, with the final planned to be played in Moscow.

Another first would be an EHF EURO on the Iberian Peninsula, as Spain and Portugal have joined forces for a bid to host the Men’s EHF EURO 2028.

The bid’s motto is ‘We play under one anthem’. Portugal’s capital Lisbon would host two preliminary round groups and one main round group. Madrid, Valencia, Malaga and Ourense are Spain’s host cities – the second main round group and the final weekend are planned to be played in Madrid.

A full overview of all bids is available on the dedicated website bids.eurohandball.com.

The applications will be approved by the EHF Executive Committee at its meeting on 10/11 June. Over the summer, site inspections will take place and in September 2021 the bids will be officially confirmed by the EHF EXEC.

The EHF EUROs 2026 and 2028 will be awarded at the Extraordinary Congress on 17 and 18 November on the occasion of the EHF’s 30th anniversary.

All four events will be played with the 24 participating teams. The dates are as follows: