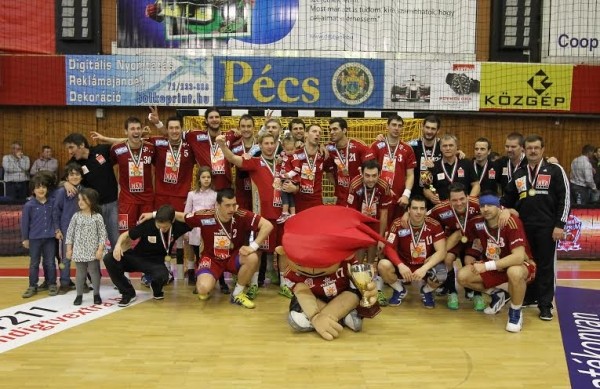 The team of MKB-MVM Veszprém won the Hungarian Cup for the sixth time in a row yesterday after defeating arch rivals Pick Szeged 27-21.

The Final 4 of the Cup was held this past weekend and the semi-finals on Saturday were won confidently by Veszprém and Szeged.

More interesting matches were held on Sunday. They were to decide the fate of the Cup and a place for the EHF Cup. In the bronze match Gyöngyös produced very weak attack and were unable to defeat Tatabánya who would most likely aim at advancing into the EHF Cup group phase next season.

The two greatest rivals met in the final. Both teams have good chances of achieving great international success as Veszprém are going to be playing for the Final4 in the CL and Szeged for the Final4 of the EHF Cup. Szeged had one missing player due to injury. Kallman is likely to miss the rest of the season. Veszprém’s form in the last few months were cause for concern but they were still the favourites to win the Cup.

A fully packed sports hall, great atmosphere and many supporters awaited the two teams. Pick Szeged produced a good start after grabbing a ball and scoring from fastbreak immediately. After 10 minutes they were 4-2 up. Szeged’s wall was tight enough and Mikler was also great. Veszprém turned the tide afterwards but the teams were neck and neck. Mikler’s saves were still great, Prce scored some big goals from 9 meters while Ilic and Iváncsik were the best shooters in Veszprém..The first half saw a real final with agressive defense, big saves, superb goals and also many mistakes. The score was a draw at half time.

The matched turned to painfully one-sided however in the second half. If there was a chance to modifiy the rules of handball Pick Szeged would surely ask to delete the first 10 minutes of the second half. This period has been their ongoing problem for a long time. Veszprém quickly widened the gap to 4 goals, which they were able to keep until the end of the match. Unfortunately Pick were good partners as their unimaginative attack play only produced four goals in 22 minutes. No excitement for the rest of the match and Veszprém easily obtained their 23th Hungarian Cup victory.