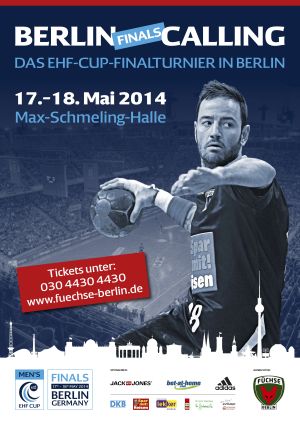 After a successful premiere in Nantes last May, the second edition of the EHF Cup Finals is also bound to be a fantastic event. With 100 days to go, over 5,000 tickets have been sold for the tournament in Berlin’s Max-Schmeling-Halle.

“Our team is working intensively on the preparations for the EHF Cup Finals in Berlin. More than 5,000 tickets have been sold so far and there are just a few tickets left in the lower level of the arena,“ said Bob Hanning, the manager of Füchse Berlin, who will stage the tournament on 17/18 May 2014.

Handball fans across Europe can purchase their place at the high-profile event in the German capital through the official website of the club – www.fuechse-berlin.de.

The tickets valid for all four matches are available in three categories for 49, 99 and 199 euros.

On the fringes of their first match in the EHF Cup Group Phase (on Sunday 9 February) Füchse will also launch the campaign “Berlin Finals Calling” which will see the promotion of the event through posters all over the city, Berlin’s airports or through spots in cinemas.

Furthermore, the official website of the EHF Cup Finals 2014 will be launched on Sunday.