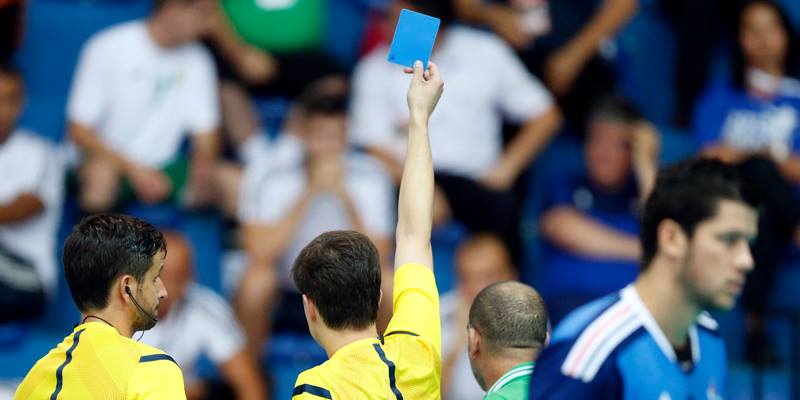 • Player injury: medical attention will only be administered on court if deemed absolutely necessary. Otherwise, the player must be treated on the side line and remain off court for three attacks.
• Passive play: following the forewarning signal from the referees, the attacking team will be allowed a limit of 5-8 passes.
• Last minute: changed to ‘last 30 seconds of a game’. Clear punishments are defined to deter unsportsmanlike behaviour and serious fouls sometimes seen toward the end in close matches.
• Blue card: a blue card is shown in addition to the red card to indicate a disqualification where a written report is required.
These proposals are the result of discussion amongst top coaches, delegates, IHF officials, media, television and marketing personnel at the IHF Forum held in Denmark in October 2014. All rules will be closely monitored and analysed throughout and after the tournaments for their effectiveness, with feedback sought from teams and various officials upon conclusion of the championships.
“After the tournament we will send a document to all the teams – also to the referees and delegates, but especially to the teams, asking about this test. We need feedback, real feedback, because this is not only an idea of the Referees Commission – this test is coming from last October in Denmark during the IHF Forum, where the top coaches from Germany, Hungary, Iceland, Poland, Spain and so on, and also people from media, TV and marketing, and of course people from IHF, agreed about these possible new rules for the future.
“But of course we need to make some tests, then we will see. Day by day we will see what happens. I hope it will not be necessary to make any big changes during the tournament, but we need feedback. Between Brazil and Russia, both World Championships, we will have more than 150 matches – I think this is enough to make some clear conclusions for the future,” says Playing Rules and Referee Commission (PRC) member Ramon Gallego.
Gallego says that according to ordinary processes, should the rules prove to be effective, they will become official in 2017:
“Theoretically, these rules would be in effect in 2017, but if we discover that these rules are really good for handball, we will try to apply them immediately – after the congress approves. We won’t wait two years more – but we must be 100% sure.”
The passive play rule has been a topic of discussion for some time, particularly amongst coaches.
“Coaches don’t agree with the different criteria on the part of the referees. Sometimes it’s too hard, sometimes it’s too soft, too light.
“They understand that the referees need less subjective criteria to help them. This is a proposal from the top coaches, and so we will follow them, no problem. They think the coach of the attacking team is responsible for looking for solutions. We will see – maximum eight passes and clear attack.
“We decided together with the coaches. Some of them think a smaller number of passes – I think between five and eight, eight maximum and five minimum – I think this could be enough,” explains Gallego.
Another rule test focuses on player injury. In order to combat unsportsmanlike behavior which sees players exaggerating an injury in order to disadvantage the opposing team, players are to receive treatment on court only if it is judged to be absolutely necessary. If players require treatment but are able to remove themselves from the court, they can be treated on the sideline and return to play after three attacks have taken place.
“If the referee is sure this player needs medical care, immediately he will stop the match and call the doctor – if the referee is sure, 100%. Sometimes it happens in a big fast break attack with pushing from behind or something like that.
“This is the idea: don’t destroy the speed of the handball, don’t destroy the rhythm of the other team, and don’t use dirty tricks – no, because now you know if you do that, you will be out for three attacks. So, I’m happy about this rule, I’m very positive about this one,” says Gallego.
The PRC are continually working to improve the Rules of the Game, and the understanding and application of those rules. At the 2015 Men’s World Championship in Qatar referees applied a tougher stance on long holding and contact, and this stricter approach will continue to be refined after varied success in Qatar.
“I’m not so happy about what happened in these tough matches [at Qatar 2015] around the line because it was a little up and down, but it was the first step.
“Now it is junior and I have discussed with these referees how handball must be played – handball is handball, it’s a hard sport, it’s not kickboxing or wrestling but also it’s not bowling, so please try to help the players to send the message how it is possible to play handball without changing the basics. We will see.”
Gallego concludes by explaining that handball is a living sport, and therefore the constant assessment and refined application of the rules is necessary in order to retain the basics but adjust to the evolving game.
“In handball we must be ready for the change without destroying the basics or the roots of handball. We compared the Olympic Final in Atlanta – I was the referee – and the World Championship final in Croatia in 2009, and then in 13-14 years, it’s a totally different sport.
“So, you must be willing to change the rules – step by step and we must be sure – this is a task for all people: coaches, media, marketing, and especially in refereeing. We cannot sleep.”
SOURCE & PHOTO: IHF