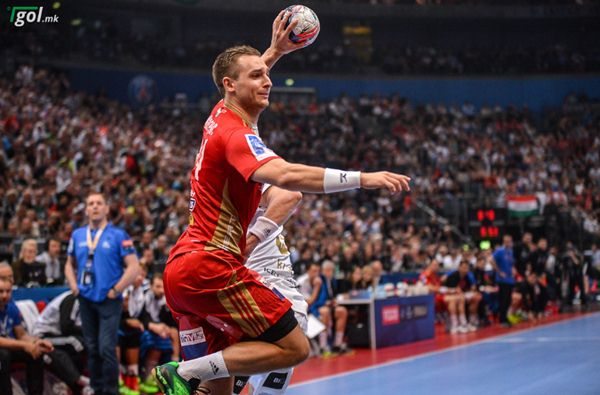 In this  thrilling Group A first round encounter match between SG Flensburg-Handewitt and newly-named Telekom Veszprém, the points were shared as it finished 24-24.

Xavier Sabate, looking for Veszprém’s first ever Champions league trophy, having lost in the final last season against Kielce of Poland, went into the match confident of getting a win having a star-studded team with the likes of Momir Ilic, Aron Palmarsson and captain Lazlo Nagy. However it was the Germans who had a 4-2 lead within the first 10 minutes. The 6000 home fans had a vital role to play if they were wanting to get behind their team to get a win and they certainly delivered.  Having the power play, the Hungarians equalised, making it 5 all in the 12th minute. Veszprém were defending well against the strong German opposition, full of Olympic champions and against Ljubomir Vranjes’ clever tactics.
Down by 2 on the 19th minute, Vranjes called a timeout telling his players that they had to move the ball quicker, and he told Kentin Mahe, a new fan favourite and Olympic silver medalist to play the ‘double deutsche’ move. The young Danish keeper of Flensburg, Kevin Møller started the match ahead of swede Mattias Andersson and made a great impression as he made great saves from ‘Momo’ and Palmarsson.  New signing Ivan Horvat came on but couldn’t create a lot against the strong Veszprém defence. Ex Paris and Barcelona left hander, Marko Kopljar, replaced Lazlo Nagy at the end of the first half of play and squeezed  goal past the young Dane in goals. Flensburg had the last say of the first half as mage made a great pass to Henrik Toft Hansen who finished under the keepers legs, going into the break down by 3 at 10-13. Veszprém had the better save and scoring percentage at half time with a 33% save percentage and 52% scoring percentage far better than the Germans.
Gold medalists Lasse Svan and Thomas Mogensen, along with keeper Mattias Andersson and fellow Swede Zachariassen were introduced after the break but this didn’t prevent Veszprém from gaining a 5 goal lead at the start of the second half. The  huge crowd were getting behind their team as Flensburg attempted to cut the deficit. Jim Gottfridsson came back from a long term injury to come off from the bench, making it 20-22 with 7 minutes to play. The last five minutes were nail biting as Flensburg managed to equalise at 23-23 but Veszprém scored to take the lead in the last minute. Veszprem playing stupidly with the ‘Libero’ had an empty net and as they lost possession, top goalscorer of the match Kentin Mahe lobbed the defenders to salvage a point for the Germans with full time score being 24-24. Mahe finished with 9 goals just ahead of sharp-shooter Momir Ilic with 7 goals.