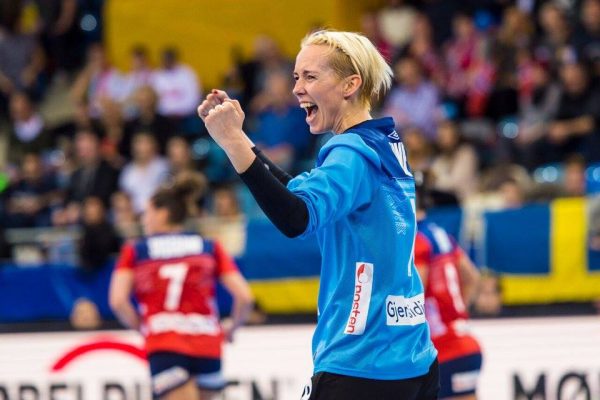 Norway continues it’s winning streak on group B of this World Championship, and this time they beat Poland with great authority with a final score of 35-20 to book a spot in the eight finals. The team commanded from the bench by Thorir Hergeirsson competed with 14 players on the squad as Emilie Hegh Arntzen and Heidi Løke missed the match due to food poisining.

The scandinavians are looking really good in this new championship, and so far, no team has been able to shake them off. This time, the rival was Poland. The coached by Leszek Krowicki didn’t have the best of starts and from beginning to end they failed to tame the powerful Norwegian squad that was determined to go for their third triumph.

After the first 10 minutes the scoreboard was 7-4 and four minutes later the Polish team requested the first timeout. By this time Katrine Lunde had already saved 5 of 10 shots and was emerging as one of the best players on court. Norway was moving the ball fast from side to side, and always finding the gap in the Polish defense that was lacking a bit of intensity. By halftime, the difference reached +7: 18-11.

It took Poland 5 minutes to score for the first time on the second half (20-12), but the problems kept on coming. By minute 14th, the goal difference was +13 for Norway, who was steamrolling their opponents (29-16). For the last half of the second period, Kari Alvik Grimsbø stepped on court and continued showed off as well. During those 15’ on court, she stopped 8 out of 12 shots received. The goalkeeping duo finished with an overwhelming 52% of saves, which help explain great part of Noway’s victory. The MVP award was for the Norwegian back Veronica Kristiansen, who was also top scorer of the match with 6 goals.

With the absence of Heidi Løke, two of the players that shared minutes on court were Vilde Ingstad and Kari Brattset. The Vipers Kristiansand line player expressed her feelings after the match: “Our game plan was to go out and take out their shooters and to be together in defence to take fastbreaks, and I thing we managed to do that in big part of the game. I feel great about playing this many minutes”. When asked about the quality of the players ‘serving’ for her, she confessed: “It’s great to play with these players, Nora could play me in the blinds, they all have great quality and it’s easy to play with them”.

On Thursday, the only unbeaten team in the group will face Czech Republic at 20:30hs, while Poland will face Hungary in a match that could be decisive for the future of both teams in the competition as they both arrive to this 4th round with two loses.