WITH less than 18 months until the Olympic Games are held in London, British Handball spoke to 2012 Handball Competition Manager Alex Gavrilovic (pictured) to see how preparations are going. Andrew McSteen reports.

“My team is very excited, but we’re a bit too busy to think about it,” said Gavrilovic, who spoke to British Handball at one of our business networking events at Crystal Palace recently.

“There’s this looming deadline, an immovable object that we can’t ignore – it’s marvellous!

“The venue will be finished imminently, it will be handed over on the 10th May to LOCOG, so having the arena available this far out from the games has never happened before for our sport, so this is an amazing thing.

“There are a lot of similarities to the Sydney Games experience. Both teams have come from nowhere to create Olympic-quality athletes from virtually nothing with limited funding. But what British Handball and the athletes are achieving is so much better.

“Of course there is more funding which shows a good vision from UK Sport and the BOA and the athletes’ attitude, but they are there as a host nation and will want to take it as an opportunity to prove that they are worthy Olympians.

“We tried this same thing for the Australian teams for the Sydney 2000 games but not as successfully as it’s been launched here and I think this particular effort that has been put in by British Handball – and Paul Goodwin in particular – is just amazing. He is doing a lot with nothing, he is creating so many opportunities from virtually so little.

“In general with any Olympic athlete the media and the public don’t see the sacrifices being made. They see Michael Phelps in the swimming pool but they don’t see the hours and hours of training that the guy does to be where he is.

“Similar to GB Handball – people will come along to an international event and say ‘yeah, they’re good athletes’ but they don’t see the hours of training, the sacrifice, the living away from home and families, and giving up jobs.

“The Olympics are made up of a whole lot of athletes that aren’t high profile. You think about the media here and football – we know what they have for breakfast, we know what cars they are driving and you just don’t get that sort of information for Olympic athletes across any of the sports unless they happen to be the world champions, the most famous ones.

“Behind them there are a whole army of Olympians, doing it tough, putting it the effort in. It will be their families, their coaches and their immediate circle of support that get them through this – and that’s what makes Olympians.”

Behind the scenes, there are also an army of staff helping to put on the Olympic Games, and Gavrilovic added: “I’m delighted to have Sue Whitehead as our Services Manager and I’ve also been joined by Chris Athanasiadis who has been appointed as Technical Operations Manager for London 2012 and who worked with me at the Sydney Games.

“In Sydney he was the Handball Training Venues Manager and in Athens he was Deputy Competition Manager, so he comes with a lot of experience.

“So we have a very strong and experienced team to help us out. We’re focussing very much on some detailed planning some 18 months out or, as somebody put it, 69 weeks until the training venue opens for the Olympics. That really focuses your mind about how little time there is left now.

“We have a lot of detailed venue operational management and detailed competition activity and planning to do, especially for the test event in November, which feels like a long time away but in real terms bringing six international teams to Britain will be a huge challenge.

“A lot of work will be done in the next few months to interview all of our potential volunteers and select the final team of about 150 out of 2,000 who registered an interest in working with handball, which is an amazing number.

“Olympic Handball at London 2012 is far from being just a London-based event, we’ve had volunteers apply from all over Great Britain from Manchester and Newcastle to Edinburgh and Belfast – there are people from all over GB who want to volunteer!

“We are going out across Great Britain to regional volunteering selection events as well as London, which is our biggest one. 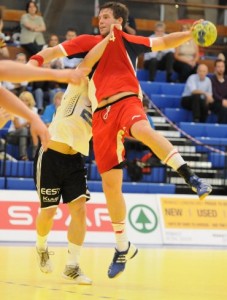 “In terms of our National Technical Official (NTO) training we have had people apply from all over as well as running sessions in Scotland, the north of England and London and it’s not just been those involved with handball, we’ve had many volunteers apply from outside of a handball background who just want to be involved in the Games.”

Handball is aiming to be one of the most successful legacy sports to come out of the 2012 Olympics, and leaving behind a meaningful legacy is an important part of the work being done by all parties.

“It would be a mistake to think that handball here is all about getting the athletes ready for London 2012 and then when it is all over let’s all get on with our lives,” added Gavrilovic.

“I think the sport is addressing that, and that is the essential bit.

“The fact that the EHF and IHF are both willing to invest in Great Britain Handball and the team speaks volumes, as they obviously want to grow the sport globally and they see London 2012 as an opportunity to put some things in place for the sport post the Games.

“Neither the EHF or the IHF are seeing this as a one-off. They want to see continued support and continued growth in this area. I’ve always said that we need a very strong English-speaking nation that plays very good handball.

“Australia didn’t quite get there with the Sydney Games so if we can achieve this here with the GB squad then it should help and inspire all the other English-speaking nations to raise their profile.”