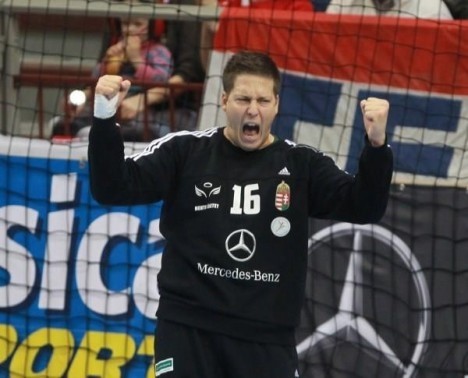 On Saturday was the third time when Vardar Skopje and MKB-MVM Veszprém met in this season. Before the derby of Group C the Hungarian fans wished fast recovery to their ex-left back, Tamás Mocsai who had a serious car accident this week.

In the first half Blazenko Lackovic got injured and Vardar Skopje couldn’t replace him. The halftime result was 16-10. The end of the game wasn’t so dramatic like last week, but the result is the same: the Hungarians got the two points with an easy, 32-24 win. The best scorers were Momir Ilic (8 goals), Cristian Zeitz (7 goals) and Matjaz Brumen, Alex Dujshebaev and Timur Dibirov with 4 goals.

Both coaches said that Veszprém’s goalkeeper, Roland Mikler was the main difference between the two teams. According to Raul Gonzales the match was decided after the first half when Veszprém lead with 6 goals. Carlos Ortega is proud of his team, because they could win easily without the injured players. The Spanish coach said that it was an important step to reach their goals in the season. Alex Dujshebaev mentioned how difficult was to play in the Veszprém Aréna’s atmosphere. According to Gergő Iváncsik Veszprém was well-prepared and played almost without mistakes.